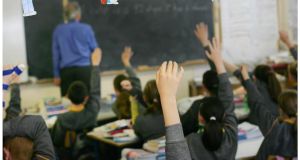 Dozens of primary schools in the Archdiocese of Dublin could face closure within two years unless a funding crisis in the sector is addressed, an Oireachtas committee has heard. Photograph: Bryan O’Brien/The Irish Times.

Dozens of primary schools in the Archdiocese of Dublin could face closure within two years unless a funding crisis in the sector is addressed, an Oireachtas committee has heard.

Anne McDonagh, director of the Archdiocese’s education secretariat, said a “significant percentage” of its 446 primary schools were at risk of shutting down in this time period because of cuts in capitation grants, summer work schemes and other supports.

“We are trying to work out what kind of schools are able to manage on the grants they get. The Department [OF EDUCATION]does not know,” she told the Joint Committee on Education and Social Protection.

“Schools that had reserves, they are eating into them. That is why we think they will not last longer than two years.”

Asked by Fianna Fáil TD Charlie McConalogue to put a rough estimate on the percentage of schools falling into this category, she replied: “I would say it’s higher than single digits.”

The committee also heard that the diocese had completed five amalgamations involving 10 schools, while 15 schools were in negotiations about further mergers.

One of these that has proved particularly controversial is the planned relocation of 300 boys from the De La Salle National School in Ballyfermot to a nearby Dominican campus with 1,000 children.

Labour TD Michael Conaghan said it was an “absoulte disgrace” that this decision was made in Archbishop’s House against wishes of the parents.

He said De La Salle had the best facilities at present, and “four schools are being pushed into a campus that you could barely swing a cat in”.

But Ms McDonagh said the amalgamation had been initiated by the local community and many parents supported it. While discussions have been taking place since 2008, she said “information was released at an inappropriate stage” and this caused unnecessary alarm.

She agreed De La Salle had a “fantastic campus” but the repair bill for the past three years was €208,000 which was “unrecoverable... The State won’t pay for that.”

She said she did not know what the De La Salle Brothers intended to do with the land but they had notified the diocese they were withdrawing their trusteeship from the school in 2015.

The Irish Times sought comment from the congregation but a spokesman was unavailable.

Ms McDonagh said architects had identified sufficient room on the the Dominican campus to facilitate the additional students, and warned that if the matter did not progress quickly the department would not sanction funding for the necessary works in time. This would mean children moving onto a campus with less than ideal facilities.