Under the Technological Universities Bill, the merged educational bodies will adopt an interim name 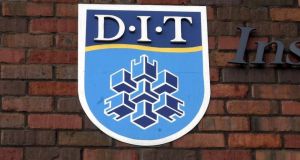 The Dublin bid of DIT, IT Blanchardstown and IT Tallaght for technological university status will cost €24 million to implement. Photograph: Dara MacDónaill

The plan to upgrade institutes of technology into technological universities (TUs) is proving a lot messier than anticipated. The estimated cost of merging Cork IT and IT Tralee for the Munster bid is €6.7 million, while the Dublin bid of DIT, IT Blanchardstown and IT Tallaght will cost €24 million to implement.

The list of challenges include restructuring human resources, boosting the proportion of staff educated to PhD level, and curriculum reform. But there are also a lot of mundane obstacles to overcome, including the question of what to call the new institutions.

Under the Technological Universities Bill, the merged institutions will adopt an interim name at the point of legal union and then a separate name when TU designation is achieved. The logic of this was queried late last year by an international panel of experts to the bidding process, pointing out “any name change carries a risk of confusion and potential loss of visibility to some of those already familiar with the institution. A double change increases those risks.”

The TU4Dublin team is taking the pragmatic approach of using “DIT” following legal merger and then using this name until TU designation is achieved. While the new name hasn’t been agreed yet, it is suggested the interim name might be uDIT or DIT³ (DIT to the power of three) as a “helpful” distinguisher for staff.

The southern bid has precisely the opposite problem. It has agreed that Munster Technological University (MTU) will be the name after designation but hasn’t figured out an interim name yet.

Tip-toeing around local sensitivities, the expert group said: “Recognising that the first new name is expected to be used for only a very limited time, we wonder what thought has been given to . . . for example, adopting either the name of one of the partners or a hyphenated name to include both partners purely for that period.”

They added: “We assume that the proposed name for the new TU has been thoroughly market-tested in terms of its visibility and appeal, particularly outside Ireland.”

Asked about this, Cork IT said it had consulted with stakeholders on all aspects of the process and this would continue.

Conference season got under way with the Irish Primary Principals Network (IPPN) jamboree at Citywest, where the Minister for Education, Jan O’Sullivan, underwent a Q&A on all matters schooling.

What did we learn? Fresh support for small schools is “under active consideration”; the department is not keen on broadening the special-needs assistant role into teaching duties; and a Government decision would be made in a “few weeks” on whether to go ahead with the new NCSE model of delivering special educational needs supports.

Possibly the most interesting reply, though, related to the moratorium on middle-management promotions.

The department said that, before the cutbacks, about 53 per cent of teachers held a promotional post and this was about 40 per cent now.

Department officials have long believed that many teachers took the money but didn’t take the added responsibility that came with such posts. And the Minister said, “There’s no point if you’ve gone through all the pain of taking things out of the system of simply copying the system . . . We want to reward those who put up their hands” in leadership roles.

One person over whom there were no leadership doubts was IPPN award winner Catherine Farrell, the recently retired principal of Holy Family School in Cootehill, Co Cavan, which has no fewer than 51 special-needs assistants for a student population of complicated needs. Like a true pro, she used her speech to pay tribute to her staff, especially deputy principal Isobel Lord.

Congratulations are in order for four teams who made the final of the Association of Teachers of Spanish in Ireland school debating competition.

The Cervantes Institute, in Lincoln Place, Dublin, hosted the event, which saw Rathdown School and Kings Hospital battle out for the plate; and St Mac Dara’s CC and Mount Anville compete for the winner’s cup.

The motion for the final was Sportspeople Are No Longer Good Role Models, or Los Deportistas ya no son Buenos Modelos a Seguir – so at least says Google Translate. The winning Mount Anville team (below) would be able to clarify this.