Feeling the heat, an eyeful of advice, avoiding clashes, teachers’ tips and what’s coming up 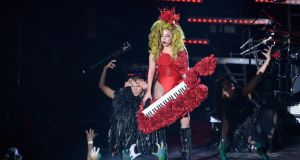 Bono was not the only celebrity to feature in the exams this year, with Lady Gaga getting a mention in the Irish aural. Photograph: Theo Wargo/Getty Images

Viral YouTube hits. Chart-topping album sales. Millions of Twitter followers. Mass adulation. It all counts for nothing until you’ve featured in a Leaving Cert exam.

Those setting the papers often try to include material that’s of relevance and interest to young people. That’s why, presumably, this year’s English opener featured a speech by U2 frontman Bono, while home economics allowed students to show off their knowledge of the same-sex marriage referendum.

Whether or not today’s teens know or care about the said “rock star and well-known humanitarian” is debatable but the Junior Cert Irish papers made up for it, featuring hugely popular New Zealand singer Lorde – she’s bezzies with Taylor Swift, you know – and Love/Hate actor Tom Vaughan-Lawlor.

One Direction, Lady Gaga (above) and Ed Sheeran also got a mention via the Irish aural exam.

Throw in Cork camogie star Briege Corkery and that brings this year’s exam celebrity count to seven so far.

Feeling the heat at exam time

So the sudden improvement in weather yesterday can only be seen as an added challenge for the class of 2015.

However, before they start feeling too sorry for themselves, a check of the Met Éireann records indicates that some previous years had it considerably worse.

The classes of 1995 and 2009 were undoubtedly dealt the toughest hands, recording the sunniest Junes on record in the past 30 years. The 2009 ones had to endure an average of 16½ hours sunshine over the first three days of the exams.

As for the most miserable June on record, that was 1987 when the first three days of the Leaving Cert saw an average of 0.6 hours of sunshine. Talk about having it easy.

Time for another look at ‘tips’

The latest to weigh in with “Ten tips for reducing eye-strain during the exams” is Dr Arthur Cummings, medical director and consultant ophthalmologist at the Wellington Eye Clinic, Beacon Medical Campus, Dublin.

At number four on his list: “Don’t hold the study material too close to you but rather at the normal working distance of 25-40cm (10-15 inches).” At number two: “Remember to blink.”

In fairness, the number one tip, “the 20:20:20 rule” is a good one, but in a sort of, all-year-round, nothing-to-do-with-the-Leaving-Cert way: “Take a 20-second break every 20 minutes by looking at something 20 feet away. This gives the focusing muscles a chance to relax before they are put to work again.”

Twenty seconds, mind. If you find yourself staring vacantly into the distance for longer than that, let’s say another piece of advice should kick in.

Clashes can be hard to avoid

On the last day of this year’s exams, Friday, June 19th, religious education has been scheduled at the same time as applied maths. Richard Dawkins (right) would see the logic in that.

In the afternoon, Italian and Japanese are scheduled at the same time – fair enough, they’re cultures apart – but then technology also runs concurrently.

The SEC says it is “mindful of emerging and changing patterns of subject selection by examination candidates in developing and finalising the timetable . . . However, given the timeframe in which the written examinations are required to be held, the number and duration of the examinations, and the wide subject choices available to candidates, it is not possible to avoid a situation where some subjects are timetabled concurrently.

“This situation arises each year in the case of fewer than 200 out of the total of more than 59,000 candidates for the Leaving Certificate.”

The SEC also said that appropriate arrangements were made for candidates affected to sit one of the subjects later.

Generally, you can’t quibble with next week’s clashes. On Tuesday, Irish paper two and Arabic are scheduled together, while on Friday, construction studies takes place at the same time as Latin. Only the Romans would have a problem with that.