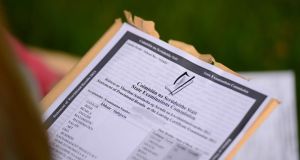 A new Central Applications Office (CAO) points scale for students entering third-level education aimed at taking some of the pressure off the Leaving Cert year has been published.

A new Central Applications Office (CAO) points scale for students entering third-level education aimed at taking some of the pressure off the Leaving Cert year has been published.

The new system, which will apply to those sitting the exams in 2017, and thus entering fifth year this month, will award 37 CAO points for a grade of 30-39 per cent in higher level exams, which is currently regarded as an E or “fail”.

The change, combined with a new regime of broader grading bands, is aimed at encouraging more students to take higher level papers while also reducing the temptation to gear their studies towards marginal gains in CAO points.

The numerical grading bands of 1, 2 and 3 are replacing the traditional A, B and C at higher and ordinary level, and critically points will go up in 10 per cent bands rather than 5 per cent.

To reduce the risk of random selection for college places, by virtue of a large number of students getting the same points total, points will no longer go up in multiples of five. Instead, they will vary by an order of eight, nine, ten or 11.

The 25 bonus points for a grade above 40 per cent in higher level Maths will remain in place, and as a result won’t apply to those getting the new H7 grade.

Maynooth University president Prof Philip Nolan, who helped to design the system, said the retention of bonus points at this scale was justified because of the “very significant added work for the student” in taking the tougher paper.

“It’s not simply the conceptual difficulty. There is at least 50 per cent more work in preparing yourself for a H6 in higher level Mathematics than a H6 in some of the other subjects,” he said.

Announcing the new scheme, Minister for Education and Skills Jan O’Sullivan said: “Together, these reforms will help to reduce the pressure on students at exam time and enable them to have a broader and more-rounded learning experience in their Senior Cycle.”

She said the new scale was designed “to minimise random selection for third-level entry” and would also “reward students who aim higher”.

The Minister said other measures were in the pipeline aimed at improving the transition of students from second-level to third-level, including a reduction in the number of CAO course codes.

Ms O’Sullivan said specialist courses with low intake were associated with higher drop-out rates and “also the points tend to be high in those niche courses”.

“We need to do more so that students don’t have to make these very particular choices when they are just leaving school,” she said. “It would be fairer to bring them in in a more general way and then let them go into these specialised areas.”

Figures published by The Irish Times last week show a fifth of courses offered on the CAO admitted 10 students or fewer last year in a trend linked to points inflation.

The Minister said “we have been getting very strong cooperation” from colleges on introducing general entry courses but “there is more to be done”.