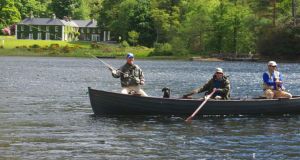 Delphi Lodge in Connemara. “By opening our gates to the Afri Famine Walk, Delphi Lodge is acknowledging our part in what happened in 1849, instead of ignoring it, while showing to the world what we are today: an Irish country house which offers a welcome to all,” said lodge manager Michael Wade. Photograph: Elizabeth Birdthistle

In the Great Famine year of 1849, many hundreds of people died of cold, hunger and exhaustion in Mayo’s Doolough Valley after being turned away from Delphi Lodge.

Now some 164 years later, the Connemara country house and sporting lodge formerly owned by the Marquis of Sligo is due to take responsibility for what occurred, when it welcomes participants in a commemorative famine walk.

Inside Delphi
The annual event held by Afri, a peace and justice organisation, normally follows the route of what is known as the “journey of horror” on March 30th/31st 1849 through the haunting Doolough Valley from Louisburgh.

For the first time since its inception, this year’s walk will actually finish inside the grounds of the 1,000-acre Delphi estate.

“By opening our gates to the Afri Famine Walk, Delphi Lodge is acknowledging our part in what happened in 1849, instead of ignoring it, while showing to the world what we are today: an Irish country house which offers a welcome to all,” Delphi Lodge manager Michael Wade has said.

Britain’s Prince Charles, actress Vanessa Redgrave and singer Bryan Ferry are among those on the award-winning angling lodge’s guest list.

“Symbols of life”, including trees and non-genetically modified potatoes, will be planted at the end of the walk, which takes places next Saturday. Participants will carry with them the names of people who are known definitely to have died along the route.

Singer-songwriter Declan O’Rourke, who is due to release an album of original songs on the theme of the Great Famine, will be among those attending.

Walk leaders will include Gary White Deer of the Choctaw nation of Oklahoma, whose ancestors contributed to Irish Famine relief, Fergal Anderson of the Food Sovereignty movement, and Salome Mbugua of AkidwA, the migrant women’s network in Ireland.

The Doolough valley fatalities occurred when several hundred people seeking certification as “paupers” in Louisburgh were told that they had to go to Delphi Lodge 10 miles away in late March 1849 for an inspection by two ‘commissioners’.

The distressed group set out on foot along the mountain road and pathway in cold, wintry conditions, including snow, but were refused assistance when they arrived at the lodge, and had to turn for home. Many never made it back.

Joe Murray of Afri said the commemorative walk was a “solemn act of respect, remembrance and solidarity with the forgotten people who died as a result of poverty and hunger in Ireland and continue to die throughout the world today”.

Welcome extended
“The welcome being extended to walkers by Delphi Lodge this year is rich in symbolism – representing a much needed ‘opening of the gates’,” he said.

“The walk will represent a demand to governments and institutions in Ireland and around the world to ‘open the gates’ to the marginalised and excluded of our world and to make food sovereignty, the elimination of poverty and hunger and the preservation of the planet our number one global priorities,” he added.

Warren Gatland: England players could miss Lions tour if not released for Japan warm-up 12:19
Failure to invest in 5G could result in €12.6bn economic loss - study 12:02
Retail sales rise before introduction of tighter restrictions 12:00
Nearly 12% living in jobless households as result of pandemic 11:52
Agreement reached on pathway to regularise pay and pensions for school secretaries 11:30