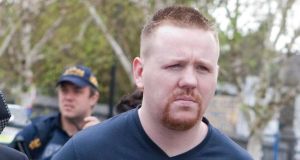 John Dundon: has pleaded not guilty to murdering Shane Geoghegan on November 9th, 2008.

A 29-year-old Limerick woman has said that she heard John Dundon plan a killing a couple of weeks before rugby player Shane Geoghegan was murdered in a case of mistaken identity.

Lisa Collins today gave evidence at Dundon’s trial, which is in its seventh day at the Special Criminal Court.

The 30-year-old of Hyde Road in Limerick has pleaded not guilty to murdering the Garryowen rugby player on November 9th, 2008.

Mr Geoghegan was shot as he returned home to his girlfriend in Dooradoyle, Limerick. The 28-year-old died of gunshot wounds to his head and body just metres from his home at Clonmore, Kilteragh.

Lisa Collins testified that in 2008, she shared a house with her partner and Dundon’s cousin, Christopher McCarthy. She said that a couple of weeks before Mr Geoghegan’s murder, Dundon came to their home with Barry Doyle, referring to the convicted gunman in Mr Geoghegan’s murder.

“John Dundon used to be talking about John McNamara out in Raheen. Pitchfork he used to call him. Barry asked him what the story was with him,” she said.

She said that Dundon also asked her and Christopher McCarthy to steal a car. She said she did not know why he wanted the car and that she didn’t want to steal it, but they did. “He was coming around to our house all the time telling us to get a car,” she said, adding that one day he got angry and said: “Get a f***ing car. I’ll slap you around the place.”

She said that he got really angry on the last day he came around and that, referring to her, he told Christopher McCarthy: “If you don’t get the f***ing car, I’ll kill her.”

She said that she, McCarthy and another man then stole a car and parked it in an apartment block. She said that she and McCarthy later took Dundon and Doyle to see the car. She identified herself on CCTV driving behind the stolen car at 5pm on October 16th that year.

Ms Collins said that she was woken by a phone ringing on the night Mr Geoghegan died. She said there was also knocking at the door. “It was John Dundon and Barry Doyle,” she said. “John Dundon was saying that Johnny Mac was dead. He said it a few times. He was laughing.”

She said that the next morning she heard about Shane Geoghegan’s murder. She later saw a reconstruction of the crime on television and recognised the car used as the car she had helped steal.

She agreed with Brendan Nix SC, defending, that she lied to gardaí when arrested in connection with Mr Geoghegan’s murder. “I was afraid to say anything,” she said.

Mr Nix asked her if the television reconstruction had got at her conscience. “When I saw the car, I felt sick over it,” she replied.

She confirmed she had also been questioned about two other murders. “I don’t know why I was questioned,” she said.

Christopher McCarthy also gave evidence. He said he was a first cousin of Dundon and remembered him moving to Limerick from London around 1999. He also said he didn’t know what use Dundon had for the car that he asked him and Ms Collins to get. “He said he’d kill me or kill my girlfriend if we didn’t. I had to get him a car,” he said.

He also described stealing the people carrier from the side of a road outside Limerick city. He said that it was another man who actually got into to the car and drove it away. He said this man took a handbag from the car. “He gave me a few pound out of it,” he said, adding there was also a cheque for €10,000 in the bag.

He said they then hid the bag in a graveyard and brought Dundon to see the car. He said Dundon and Doyle called to his house again on the night of the murder. “He (Dundon) was saying: ‘Pitchfork is dead’. I knew he was on about John McNamara,” he said. “Kind of excited he was.”

The trial continues before the non-jury, three-judge court with Justice Nicholas Kearns presiding.