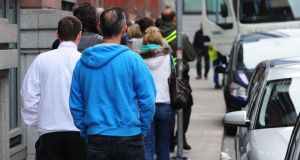 Brian King (48) was managing a Social Welfare Office when he purposely overpaid 25 welfare recipients before contacting them and saying the overpayment had been a mistake. He demanded they return the overpaid amount and then stole it for himself.

A former senior civil servant has been jailed for 16 months for defrauding the taxpayer out of nearly €17,000.

Brian King (48) was managing the Social Welfare Office in Dún Laoghaire when he purposely overpaid 25 welfare recipients before contacting them and saying the overpayment had been a mistake. He demanded they return the overpaid amount and then stole it for himself.

The scam occurred over a one-year period and came to light when the Department of Social and Family Affairs received a tip-off in an anonymous letter. King has since been fired.

Dublin Circuit Criminal Court heard that the thefts resulted from King’s gambling problem, which was exacerbated by the heavy workload his office was under since the economic collapse. King’s defence counsel claimed he was under stress because the number of people on jobseekers allowance in Dún Laoghaire had increased from 3,000 to 8,000.

King of Springhill Avenue, Blackrock, pleaded guilty to four sample counts relating to the theft of €16,957 at the Social Welfare Office, Cumberland Street between April 2010 and August 2011.

Judge Martin Nolan said King “spotted an opportunity and used his position and intelligence to steal the money”. The judge said he had “the perfect mitigation” in that he has no previous convictions and entered an early guilty plea.

He noted that King was under significant pressure at the time and has now lost his “position in life and his career”. However, the judge said he couldn’t grant the defence application to impose a non-custodial sentence because of the serious breach of trust involved.

Garda Daniel Tracey told prosecuting counsel Tony McGillicuddy BL that King was an executive officer in the Department and had been a civil servant for 26 years. Due to staff turnovers and illnesses, he was effectively in charge of the office at the time of the scam.

King would purposely make large overpayments to welfare recipients before ringing them up and saying there had been a mistake and they would have to repay the money.

He told them they were in danger of losing their social welfare entitlements if they did not comply. They would then meet King and repay the money in cash. These meetings would either occur in an interview room in the office or at an off-site location. A later audit showed none of the money was lodged back into the Department’s accounts.

King was brought in for interview, where he made immediate admissions, saying he had a serious gambling problem. Garda Tracey accepted this and told the court that betting slips were found in his office.

None of the money has been repaid but there is a procedure in place where the Department can reclaim the money from King’s pension when it matures.

Defence counsel Sean Guerin BL said his client lived at home with his parents and that his mother was very ill at the time which added to his stress. She has since passed away.

Garda Tracey agreed with counsel that King was “glad to be caught” and that he is unlikely to reoffend.

Mr Guerin added the social welfare recipients did not lose any money and that the Department was the only victim.