HSE issues alert over contaminated batch of drug in Cavan, Louth and Meath 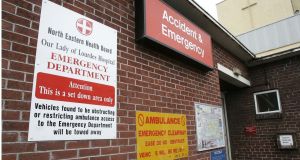 Two women are being treated at the Our Lady of Lourdes Hospital, in Drogheda, Co Louth after consuming a suspected batch of contaminated cannabis. Photograph: Dara Mac Donaill.

Two women who fell seriously ill after consuming cannabis were still being treated in intensive care in hospital in Drogheda last night.

One of the women has shown signs of an improvement in her condition, but she remained on a respiratory machine.

Meanwhile, gardaí are waiting for the results of tests carried out on traces of a drug, believed to be cannabis, which were found in a follow-up search of a house in Co Louth.

Sources said they have not ruled out the possibility that the cannabis was either synthetic or it was taken alongside a synthetic drug.

The two women, who are in their 20s, are are being treated in Our Lady of Lourdes Hospital in Drogheda. Both are believed to have consumed cannabis in recent days but the side-effects they have suffered are not usually caused by the drug on its own.

The first woman took ill on Monday night and the second became seriously ill in the early hours of Wednesday morning. The two are not believed to be known to each other.

“The symptoms are far too serious to have been caused by cannabis on its own,” said one source.

The HSE issued an alert to community and voluntary groups working with drug users advising them that a contaminated batch of cannabis seemed to be circulating in counties Cavan, Louth and Meath.It also warned anyone suffering bad side-effects after using drugs to seek medical help straightaway.


‘Get help immediately’
“If someone gets into difficulty after consuming a substance, it is critically important to get help immediately by calling the emergency services,” said Andrew Ogle of the HSE Addiction Services.

The HSE also cautioned about the serious health risks of illegal drugs generally, which it said can cause addiction, conditions and complications, both physical and psychological.

Gardaí in Drogheda believe that cannabis consumed by the two women was sourced in the Drogheda area.