Tributes to Karen Buckley as man charged with murder

Tears, hugs and flowers as hundreds gather at candlelit vigil in solidarity and pain 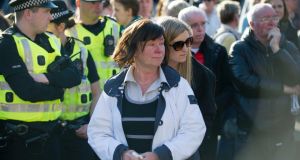 Glasgow paid a heartfelt tribute to Irish student Karen Buckley when hundreds of people gathered in the city centre for a candlelit vigil to mourn her.

People wept and embraced as many laid floral tributes at the base of the monument to Sir Walter Scott in the centre of George Square.

Ms Buckley (24) was last seen on CCTV outside a nightclub in Glasgow early last Sunday morning. Her body was discovered on a farm outside the city on Wednesday.

A 21-year-old man, Alexander Pacteau, yesterday appeared at Glasgow sheriff’s court charged with her murder and with attempting to defeat the ends of justice.

The hearing before Sheriff Charles McFarlane was held in private. Mr Pacteau made no plea or declaration and he was remanded in custody to appear in court again next week.

Police are continuing to prepare a file on the murder for the procurator fiscal, the Scottish equivalent of the Director of Public Prosecutions in Ireland.

Among those at Friday evening’s vigil was the Lord Provost of Glasgow and mother-of-two, Sadie Docherty.

She said the large turnout reflected people’s sympathy for Ms Buckley’s family and the impact her murder has had on a city which is home to thousands of students from all over the UK and Ireland.

“This was a young girl attending university here with her whole life in front of her and it’s suddenly cut short and as a mum myself, you think it could be your daughter so this vigil is about solidarity with Karen’s family but it also shows just how much Glasgow is hurting.”

Ms Buckley’s parents, John and Marian, accompanied by her brother Kieran, arrived as the vigil was ending. They placed a photo of their daughter beside the floral tributes before they spent a few moments reading messages of support left by people.

Earlier, they visited Glasgow Caledonian University where their daughter had begun studying occupational therapy in January and they met her classmates before laying a wreath.

A second memorial event has been organised tonight in the Garnethill area of Glasgow where Ms Buckley was living. It has been described as a “silent vigil for our neighbour Karen Buckley”.