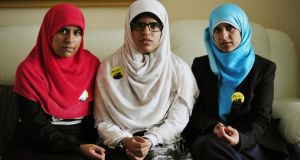 The trial in Cairo of Irish national Ibrahim Halawa set for yesterday has been postponed until August 12th for “technical reasons”.

His sister Nosayba Halawa, who is in Cairo awaiting the proceedings, said last night: “I am surprised and upset by the postponement. My brother will spend another month in prison, although he did not do anything. That’s against all the laws in the world where people are not considered guilty until proven guilty.”

She asked: “Who is going to compensate my brother and my family for our suffering?”

Arrested last August along with his three elder sisters, Irish born and raised Mr Halawa (18) was due to stand trial on charges of belonging to a terrorist organisation, murder and torching a police station.

He and his sisters, Somaia (28), Fatima (23), and Omaima (21), were detained at al-Fatah mosque in Ramses Square in central Cairo while taking part in a Muslim Brotherhood-led protest against the July 3rd ouster of president Mohamed Morsi, a Brotherhood stalwart, removed by the army following mass demonstrations against his rule by millions of Egyptians.

The sisters were held for three months, then released on bail and permitted to return to Ireland. Mr Halawa’s detention order was repeatedly renewed pending investigations into his activities and he was eventually charged. He was due to stand trial alongside 483 other accused.

His sisters, who refused to return to Egypt, where they were born, were set to be tried in absentia.

Son of Sheikh Hussein Halawa, Ireland’s most senior Muslim cleric and imam of the Islamic Cultural Centre in Clonskeagh, Dublin, Mr Halawa has been visited 19 times by consular staff and Ireland’s Ambassador, Isolde Moylan. The family has also been permitted weekly visits.