‘Investigation on site in Chapelizod has been exhausted as far as it goes,’ says senior garda 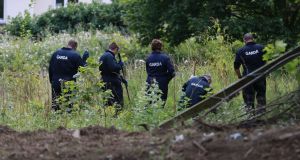 A picture from last month shows gardaí searching the site at Chapelizod as part of the Trevor Deely’s disappearance. Photograph/Nick Bradshaw 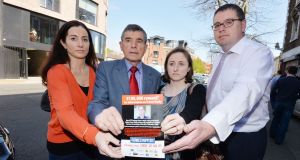 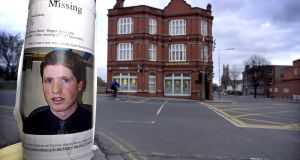 A poster of Trevor Deely is seen near the bank at Baggot Street and Haddington Road where he was last seen. Photograph:Cyril Byrne/The Irish Times

Gardaí have ended the search for the remains of missing man Trevor Deely on a three-acre site in Chapelizod in Dublin.

The six-week investigation at the site entered its final phase on Thursday.

A garda spokesman said although the search has ended, the site remained closed to the public.

“Unfortunately, nothing that furthers the search for Trevor was located during the search,” he said.

“An Garda Síochána wish to thank the public for their patience during the operation.”

Mr Deely was 22-years-old when he was last seen early in the morning of December 8th, 2000, near Haddington Road in Dublin’s south inner city.

Gardaí began working at the Chapelizod site on August 9th and say they have now exhausted all locations there which they identified as areas of interest.

The site in west Dublin was cleared of trees and other vegetation to allow extensive excavation to begin with specialist equipment.

Drones were banned from flying over the site in the early weeks of the extensive search.

It is understood the primary digs on “targeted locations” within the three-acre site have not uncovered clues about the disappearance of Mr Deely.

“The investigation on the site in Chapelizod has been exhausted as far as it goes. By next week, we would expect to be moving a lot of resources from the site,” one senior garda told The Irish Times earlier on Thursday.

“The site is still being surveyed and this is set to continue but targeted digs within the site have proved inconclusive. This has been one of the largest operations to take place for Mr Deely and we had high hopes of this investigation yielding a result for the Deely family.

“Unfortunately, this site has not proven to have given us the clues we had hoped for,” the source said.

The Garda Water Unit spent several days searching water on the site last week but it is understood this part of the search has also ended.

The investigation at the site was prompted by information gardaí received suggesting Mr Deely had been shot dead by a well-known criminal that he had a chance encounter with in Dublin’s south inner city on the night he disappeared. This information also suggested Mr Deely’s body, or material linked to his disappearance, may be at the Chapelizod site.

Hopes of a breakthrough in the case were raised when gardaí recovered a gun in the first week of the search but sources have downplayed its significance.

Gardaí now believe the gun recovered within the grounds in Chapelizod is not connected to this case.

The man identified as the suspect in the latest search for Mr Deely was active in drug dealing and armed robbery and living off the earnings of prostitution at the time of the disappearance.

Gardaí were working off intelligence they had received following an appeal earlier this year for new information into the disappearance of the young man.

Mr Deely was last captured on CCTV passing the Bank of Ireland ATM machine on Haddington Road at 4.14am on December 8th, 2000.

“The crux of the digging is drawing to a natural conclusion as it has not yielded any results. We will still keep a presence there but this particular stage of the current investigation into Trevor’s disappearance is drawing to a conclusion,” the senior garda said.

“It’s obviously disappointing news for the young man’s family who have been briefed on the ongoing investigation,” they added.

In April, gardaí published enhanced CCTV images showing him conversing with an unidentified man during his last known movements.

The enhanced footage captures a man dressed in black outside the rear entrance of Bank of Ireland’s asset management offices on Wilton Terrace, Dublin 2, where Mr Deely worked.

The man appears at 2.59am and takes cover behind a pillar. He waits there for approximately 35 minutes.