Timeline of investigations into Omagh bombings 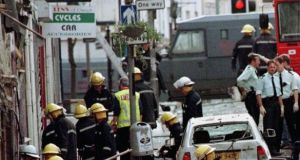 September 7th, 2000: The inquest into the Omagh bombing begins.

October 3rd, 2000: The officer in charge of the investigation says he knows who is behind the attack. Eric Anderson, acting assistant chief constable of the RUC, tells the inquest the investigation was “active and ongoing” with much work to be done still.

October 10th, 2000: The BBC broadcasts the names of four men connected with the Omagh bombing, having fought off legal attempts to gag its Panorama documentary, which links the four to mobile telephones used in Omagh on the day of the explosion.

December 7th, 2001: A report on the police inquiry into the Omagh bombing claims that warnings were received and ignored, crucial intelligence was not passed to the inquiry team, key suspects were never questioned and the investigation itself was riddled with hundreds of errors. Ombudsman Nuala O’Loan, resists pressure to delay or tone down her critical report on the investigation.

December 13th, 2001: The report blames poor leadership for a catalogue of errors surrounding the bombing.

January 23rd, 2002: Colm Murphy is found guilty by the Dublin Special Criminal Court of conspiracy to cause the Omagh bombing. He is the only person yet convicted in connection with the explosion.

July 26th, 2002: The families of the Omagh bomb victims begin a civil action against two men suspected of being responsible. Lawyers acting for the Omagh Victims Legal Trust served the writs at the homes of Seamus Daly and Seamus McKenna in Dundalk, Co Louth. Writs are also served on three more men who are being held in Portlaoise Prison on unconnected matters.

February 18th, 2003: Seamus Daly, who was arrested in connection with the Real IRA bombing at Omagh, is charged with membership of an illegal organisation.

October 19th, 2003: A secret transcript is published of a conversation between Real IRA informer Paddy Dixon and his police handler, John White, three days before the bombing, in which Dixon warns the Irish state that “Omagh is going to blow up in their faces.” It is claimed that the bomb was allowed to “go through” to preserve Dixon’s role in the terrorist organisation. Relatives of the victims call on the European parliament to launch a full inquiry into the claims.

February 21st, 2004:The chief constable of the Police Service of Northern Ireland calls for the republic’s authorities to hand over Dixon.

April 23rd, 2004: The landmark civil action by the victims’ families to sue the alleged bombers begins with a preliminary hearing at the high court in Belfast.

January 21st, 2005: Colm Murphy, the only person jailed in connection with the bombing, has his conviction overturned but will face a retrial.

May 4th, 2005: Sean Gerard Hoey, an electrician from Jonesborough, Armagh, is to be charged with murdering the 29 victims.

May 10th, 2005: A crown barrister tells the Northern Ireland high court at a remand hearing that papers are to be served on Sean Hoey. He is already in custody accused of being a member of the Real IRA and of taking part in a series of attacks on behalf of the dissident republican organisation.

May 26th, 2005: Sean Hoey is charged with multiple offences including 29 counts of murder.

June 29th, 2005:Anthony Joseph Donegan is released on the order of the Public Prosecution Service after the charge against him is dropped.

December 19th, 2006: Two charges against Sean Hoey are effectively dropped after prosecution lawyers accept there is no case to answer.

December 21st, 2006: Mr Justice Weir rejects an application to have the case thrown out of court after the defence alleges “shortcomings, lies and mysteries”. As well as the doubts relating to witness statements, the defence had criticised DNA evidence.

January 9th, 2007: Sean Hoey will not take the stand to give evidence, his defence team tells the court.

March 12th, 2007: Police begin advertising in newspapers for information about the car used in the attack.

December 20th, 2007: Mr Justice Weir delivers a verdict of not guilty in the case of Sean Hoey.

January 3rd, 2008: The Northern Ireland Policing Board agrees to appoint a team of independent experts to re-examine evidence from the bombing.

April 7th, 2008: Nineteen relatives of victims start a civil action against Michael McKevitt, Seamu Daly, Colm Murphy, Liam Campbell and Seamus McKenna, and against the Real IRA as a “corporate body”. All five men deny they had any part in the bombing.

July 9th, 2008: Northern Ireland’s Policing Board admits no one will be charged over the massacre unless fresh evidence is found and new witnesses come forward.

June 8th, 2009: Michael McKevitt, Seamus Daly, Colm Murphy and LiamCampbell are found liable for the bombing in the civil case brought by the families of those killed. The judge awards more than £1.6 million in damages to 12 relatives. McKenna is cleared of any involvement.

June 11th, 2009: Evidence in the Omagh bomb case is re-examined to establish whether there are grounds to re-try Sean Hoey, the man acquitted of the 29 murders. The move comes after two officers accused of lying in the Crown Court trial of Co Armagh electrician Sean Hoey two years ago were cleared by the Northern Ireland Police Ombudsman.

January 13th, 2010: Retrial of Colm Murphy begins at the Special Criminal Court in Dublin on a charge connected with the Real IRA bomb in Omagh

February 24th, 2010:Colm Murphy is acquitted of a conspiracy charge in relation to the 1998 Omagh bomb by direction of the Special Criminal Court after key evidence was ruled inadmissible.

November 6th, 2012: Mr Justice John Gillen says it is unsatisfactory that certain preparatory arrangements had not already been made ahead of the start of the case against Colm Murphy and Seamus Daly. Their retrial had been due to begin in Belfast High Court in autumn 2012 but was delayed after a defence lawyer fell ill.

March 20th, 2013: Colm Murphy and Seamus Daly are found liable for the Omagh bombing following a landmark civil action taken by relatives of some of the victims. The trial delivered the delivered the same outcome in the same court as the original case against them, with judge Mr Justice John Gillen ruling the men were responsible for the 1998 Real IRA attack.

April 8th, 2014: Seamus Daly is arrested over the Omagh bombings.

April 11th, 2014: Seamus Daly is remanded in custody in connection with the murder of 29 people. The magistrate refused bail but reminded the court that Mr Daly did have a right to appeal this to a higher court.

April 21st, 2015: A judge at Omagh Magistrates Court says she may consider a bail application for Seamus Daly if there is no progress in the prosecution case against Seamus Daly in the next six weeks.

August 18th, 2015: Lawyers for Seamus Daly are given a month to decide whether to cross-examine witnesses in a legal attempt to stop him facing trial.

25th February, 2016: District Judge Peter King assesses evidence in Omagh Magistrates’ Court to determine if it is of sufficient strength to warrant trial in the Seamus Daly case. A number of witnesses are set to give evidence over two days.

1st March, 2016: Prosecutors in the North drop all charges against Seamus Daly in connection with the 1998 Omagh bomb in which 29 people died. The case against the only remaining suspect has collapsed after the evidence provided by a civilian witness was called into question.