Three who died in Laois crash had been at birthday party 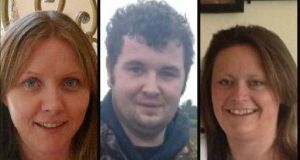 Angela Kelly, Martin Brophy and Orla Curry died in a car crash in Co Laois in the early hours of Sunday morning. 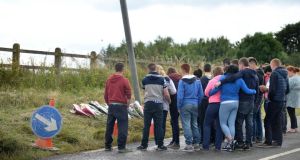 Young people stand and support each other at the crash scene on the Rathdowney to Abbeyleix Road, Co Laois where three people were killed. Photograph: Dara Mac Dónaill/The Irish Times

Three people were killed in Co Laois when their car hit a road sign not long after celebrating a 21st birthday in the early hours of Sunday morning.

The deceased – who have been named as Orla Curry (20), Martin Brophy (20) and Angela Kelly (35) – had returned home from the party before venturing out again to a local 24-hour service station when they crashed.

Local fire fighters who knew the deceased attended the scene at Middlemount on the R433 Rathdowney to Abbeyleix Road. Bouquets of flowers lined the side of the road on Sunday.

A fourth passenger, a teenager related to Ms Kelly, was injured but was recovering in Tullamore hospital and gardaí have spoken to him in an effort to establish the cause of the collision.

“Words like devastated are overused and that’s exactly how people are. Plus the fact that it’s three young people just makes it worse,” said Rathdowney parish priest Fr Martin Delaney.

The driver of the car Mr Brophy, who lived on the Johnstown Road in Rathdowney, was described as being keen on fishing and he had worked in a local pub. “A very impressive young fella,” reflected local councillor John King.

It was another tragedy in his family, 18 months after his mother Edith died on St Stephen’s Day, 2013.

Fr Delaney said Mr Brophy was very close to his teenage brother, and he also had two very young siblings.

“He doted on his little baby sister and he had just moved out to his own house in the last week,” he said.

“His little sister was missing him so much because he moved out and then this happened. They were just beginning to pick up the pieces from when his mother died.”

Ms Curry, who was an employee of the nearby Donaghmore Famine Workhouse Museum, is understood to have been an only child. Her family was a close neighbour of Ms Kelly’s family although Ms Kelly lived in the town.

It is understood the trio had attended the 21st birthday party in Clonmore, Co Tipperary. They had returned home before deciding to travel to the Manor Stone Service Station, a popular local meeting spot.

On their way, at about 3am, they collided with a traffic sign on a straight stretch of road which has been the location of two other fatalities in recent times.

Investigating gardaí in Portlaoise have appealed for witnesses.

“It’s very hard to come to terms with [the death of] three young people,” Cllr King said on Sunday evening.

“It’s only now that people are starting to realise the seriousness of it because this morning when I went to church the parish priest said he would have to tell [the congregation] that they lost three of their parishioners last night.”

By lunchtime, a group of people, mainly friends of the deceased, had gathered for support in the square in Rathdowney.

“They were talking about the incident and I knew by looking at them they were in dreadful shock. In every small town all the young people would be very friendly and they would know each other.”

Fr Delaney was called to attend the scene of the crash in the early hours of the morning.

“The work that emergency services do; I was struck by the volunteers and they were having to do that work and knowing that they knew the people they were dealing with. It’s not just another job, it’s a local thing.”