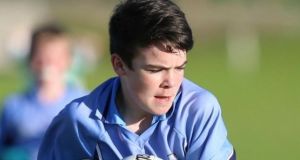 A 20-year-old student has admitted he is responsible for the death of Co Fermanagh schoolboy Oisín McGrath, who died from a playground punch nearly three years ago.

At a hearing in Dungannon, listed only as a mention, Francis McDermott, of Camphill Park, Newtownbutler, Co Fermanagh pleaded guilty to the manslaughter and unlawful killing of 13-year-old Oisin.

He died in hospital on February 9th, 2015 from head injuries, four days after the row over a football in the grounds of St Michael’s College, Enniskillen.

McDermott was a 17-year-old sixth-former at the time and both were pupils.

Members of the McGrath family, including the schoolboy’s parents, Nigel and Sharon, were in the Crown Court on Monday to watch McDermott as he acknowledged his guilt.

Defence QC Martin Rodgers had told Judge Stephen Fowler QC that he had “an application for your honour to direct that the defendant be rearraigned on the one count on the bill of indictment”.

After the clerk put the charge of manslaughter to McDermott he simply replied: “Guilty”.

Mr Rodgers then successfully applied for McDermott to be released on his continuing bail of £500 while pre-sentence and other reports on him are compiled.

Judge Fowler warned the engineering student that being granted bail was no indication of “how I will deal with this case ultimately”.

Prosecuting QC Ciaran Murphy said that it was his intention to obtain victim impact statements from the family of the schoolboy and how his death has affected them.

Oisin’s family left court without commenting on the proceedings.

In the days following the teenager’s death it was reported that his family had allowed his organs to be used to save the lives of five other people.

It also emerged that his parents later set up a trust in their son’s name and memory, aimed at raising awareness in organ donation and brain injury research.

McDermott will be sentenced late next month.