Philip Cairns: ‘We’re shocked a suspect is being named’ 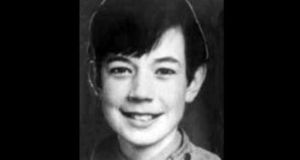 Philip Cairns was last seen on the Ballyroan Road, Rathfarnham, Dublin on Thursday, October 23rd, 1986. He was aged 13.

It was here that Philip Cairns, a 13-year-old schoolboy, was last seen before disappearing on his way back to school on an October afternoon in 1986.

Almost 30 years on, his disappearance still casts a long shadow across a community which has grappled with hundreds of reporting sightings of the boy, multiple searches and fruitless leads.

The latest development - which led gardaí to question the late Eamon Cooke, a former pirate radio broadcaster who was convicted of indecent assaults of young girls - has, once again, re-opened a case which has never faded from public view.

“I was just talking about it earlier: we’re all shocked that someone could be named now, so long after all those investigations,” says a neighbour of the Cairns, who declined to give her name.

“The investigations were massive. There have been so many searches. Most of us even had our houses and attics searched at the time.”

Another, who has seen newspaper headlines over potential leads come and go over the years, says it is far too early to say anything definitive.

“A few years ago there was another lead which didn’t lead to anything. I think we should not to jump to any conclusions at this stage.”

Most neighbours on Ballyroan Road decline to comment for fear of upsetting family members, some of whom still live on the street. Inquiries to the Cairns family home went unanswered.

Local TD John Lahart, who grew up on the same road, says there is enormous loyalty and affection for the family who have played a central role in the community. “This is a close-knit community. It was a very special place to grow up in...,” he said. “There are people saying this could bring closure to the family. I really can’t see how that could be. If these latest reports are accurate, the fact that Philip might have come to harm can only be traumatic for the family.”

Lahart, who went to the same secondary school as Philip about half a mile away, says the mystery has bound together three generations of people .

Despite a Garda investigation involving 50 detectives, more than 1,500 written statements from locals, some 200 reported sightings and multiple searches, the case has never been closed.

“Philip would have been 43 later this year; I’ll be 52. He’s never disappeared from our memory. Gardaí over the past 30 years have followed up every single lead and spent an inordinate amount of time on the case,” Lahart says.

“They have dealt with every piece of information sensitively and helped to keep his issues around his disappearance in the public eye.”

While Philip was a relatively quiet and shy boy, say locals, the smiling photo of him in his school tie and confirmation rosette still makes him one of the most recognisable in the country.

Many aspects of the case continue to puzzle investigators and the wider community, says Lahart.

The fact that Philip’s schoolbag was found in a laneway close to his home six days after his disappearance has never yielded a satisfactory explanation. The area had been previously searched by gardaí.

The only items missing were a number of religious textbooks - the Good News New Testament, and a copy of Christian Way I. He had been due to attend religion class that Thursday afternoon.

Gardaí hope developments in DNA technology may make it possible to establish who had contact with the bag before it was left int he laneway.

“The fact that he was such a conscientious lad made his disappearance so unusual,” says one local resident.

For now, though, locals are still taking in the latest developments and hoping it will lead to some definitive answers.

“I think Philip’s story changed us and the entire country,” says a neighbour on Ballyroan Road, whose four children who were contemporaries of Philip’s.

“We were much more innocent then. We didn’t know what dangers there were. After he disappeared, we were all much more careful. We kept a close eye on our children. With my grandchildren, it’s the same. You can’t be too careful.”

4 ‘We’ll see each other again’: Trump bids farewell to Washington