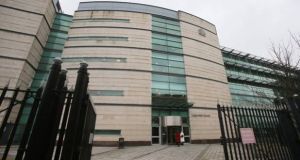 A man accused of revealing the name of the woman at the centre of a high profile rape trial in Belfast involving two rugby player is to contest the charge.

A solicitor for Sean McFarland told Belfast Magistrates’ Court he is pleading not guilty to breaching a lifetime ban on reporting the identity of the complainant in the case against former Ireland and Ulster players Paddy Jackson and Stuart Olding.

Mr Jackson (26) and Mr Olding (25) were found not guilty by a jury of raping the then 19-year-old student in June 2016. Blane McIlroy (26) was found not guilty of a charge of exposure, while Rory Harrison (25) was cleared of perverting the course of justice and withholding information.

Due to high public interest, concerns over social media commentary persisted throughout the 42-day trial, and the complainant was entitled to anonymity during and after the case.

Mr McFarland (36), of Rinnalea Gardens, Belfast, is charged with publishing her name on a date between February 7th and 9th this year, in contravention of the Sexual Offences (Amendment) Act 1992.

A date for the trial is now expected to be set later this month.