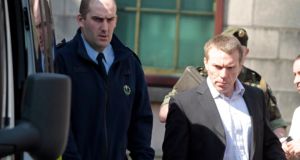 Noel Callan (right), of Cullaville, Castleblayney, Co Monaghan was sentenced to death in 1985 for the murder of Garda Patrick Morrissey. Photograph: Collins Courts

On July 18th the Supreme Court ruled that Callan was entitled to remission on his sentence, which could mean he will be released very soon.

The doctrine of common design holds that participants in a crime are jointly liable for everything that results from the acts occurring within the scope of their prior explicit or implicit agreement.

Armed robbery
Noel Callan, then 22, and Michael McHugh, then 23, took part in an armed robbery outside the labour exchange in Ardee on the morning of June 27th, 1985. Neither was a member of a paramilitary organisation nor, at that time, had any association with one. They fired a shot over a Garda car that came on the scene and made off in a hijacked car. They transferred to a motorcycle, which they had secreted outside the town, but then crashed into an oncoming car. They were both injured and they made their way on foot towards a farmer’s house, pursued by Patrick Morrissey. Noel Callan was bleeding profusely and was some distance from where the murder took place.

On being arrested the two denied any part in the robbery and the murder. They were imprisoned in Portlaoise, where Michael McHugh immediately associated with an INLA faction. Noel Callan has claimed that members of this INLA faction had threatened to kill him if he did or said anything that would jeopardise the defence of McHugh. In the subsequent trial in the Special Criminal Court, they gave perjured evidence, claiming they had not taken part in the robbery nor had had any part in the murder. At no stage in that trial or in the subsequent appeal to the Court of Criminal Appeal was it argued that Callan could not be convicted on the basis of the doctrine of common design as it was hardly believable, beyond reasonable doubt, that there had been an explicit or implicit prior agreement to murder an already disabled pursuer.

One of the judges in the Supreme Court on July 18th, Adrian Hardiman, referred to this issue. He said: “[Noel Callan] might have argued that the common design extended only to the robbery and the firing of shots to frighten pursuers and that the deliberate killing of the already disabled Sergeant Morrissey was never in his contemplation but was a gratuitous act on the part of McHugh. That was a case which he could have put before the court of trial, but he did not do so. Instead, he gave perjured evidence to the effect that he had no involvement in the robbery or with McHugh in the death of the sergeant. This denial was rejected and the conviction was upheld on appeal.”

But was there anything to prevent Noel Callan’s legal representatives arguing that even if the court found his denial of having any involvement in the incident untrue he should still not be convicted of capital murder because of the improbability that the common design extended to murdering a disabled pursuer? Even in the absence of defence counsel making this case, the court could have considered the issue and surely might have done so when deliberating on the common design issue.

The Special Criminal Court did not avert to this central issue and, instead, went on to sentence him to death.

Senior counsel Deirdre Walsh and Rory White with Anne Fitzgibbon solicitors, became his legal representatives in 2010 and they focused on the terms of the presidential order that had been issued in 1986 commuting the death sentence to 40 years’ imprisonment, claiming Noel Callan was entitled to the normal remission available under the prison rules.

‘A nonsense’
Counsel for the State first argued that it was understood the commutation was to be without remission. When that was shown to be false by the production of the documents conveying the Government’s advice on the issue, they then argued that Callan was not serving a sentence but a “commutation”. Adrian Hardiman said: “I believe that, in terms of logic, law and language, this is a nonsense.”

Noel Callan has been a model prisoner. He has completed several Open University courses and became an accomplished painter. He is without anger, he is disciplined, clever and compassionate – he has expressed his remorse for his part in the affair which had such an awful outcome.

The widow of Patrick Morrissey, Bernie Morrissey, was in court on July 18th and was distressed with the outcome. It was hardly surprising given the savagery of her husband’s murder and the grief that has caused her and her family ever since.
Vincent Browne acted as a barrister for Noel Callan from 2000