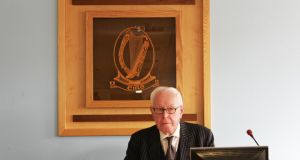 Mr Justice Peter Smithwick at the Tribunal of inquiry into collusion by employees of the State & Gardai in fatal killings of RUC Chief Superintendent Harry Breen and Supt Robert Buchanan in 1989. Photograph: Cyril Byrne / The Irish Times

The Commission of Investigation into the Garda bugging affair must investigate if there were any “smoking gun” evidence that would confirm that there was Garda collusion in the IRA murders of RUC officers, Chief Supt Harry Breen and Supt Bob Buchanan, a solicitor has demanded.

Solicitor John McBurney, who represented the Breen family during the Smithwick Tribunal investigation, said yesterday the commission must seek to establish were there Garda tapes available that related to the 1989 murders of the two officers who were shot close to the Border in south Armagh.

“At the top of the rung I want to know is there a smoking gun tape out there that reveals a Garda phoning the IRA to say that Harry Breen and Bob Buchanan are coming to or are at Dundalk Garda station,” said Mr McBurney.

The solicitor said it may well be the case that no such tape exists but thereafter what must be established is whether there were tapes of phone calls from senior Garda officers in Dundalk, Monaghan, Drogheda or at Phoenix Park headquarters to other senior officers expressing concerns about a Garda mole or moles in Dundalk working for the IRA.

It was equally important that the commission should investigate whether any Garda officers “had violated the discovery process” by not telling Judge Peter Smithwick that there were tapes available that could have relevance to his inquiries into the murders of Chief Supt Breen and Supt Buchanan.

The Smithwick tribunal found that at least one Garda colluded in the murder of the two officers. Mr McBurney said that if tapes produced information relevant to the inquiry then it may be that the Smithwick investigation should be re-opened.

More generally the DUP chairman of the Assembly’s justice committee Paul Givan said he is to write to the Taoiseach Enda Kenny “to ask for a forensic examination” of recorded Garda phone calls to see if there is any information pointing to collusion between the Garda and the IRA in Northern Ireland.

“Whilst there have been massive repercussions in the Republic of Ireland following the Garda’s secret phone recordings being made public, there also needs to be a focus on how these recordings could help identify collusion between the Garda and the PIRA,” he said.

He also called for a particular focus in relation to Smithwick. “It seems highly irregular that when lawyers in the Smithwick Tribunal sought phone records from Dundalk Garda station, none were forthcoming,” he said.