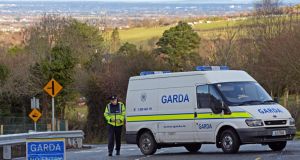 A garda road-block at the scene , where the remains of a man believed to be in his 30s have been found with gunshot wounds, at Bohernabreeena road, Tallaght, Co Dublin. Photograph: Eric Luke / The Irish Times

The remains of a man believed to be in his 30s have been found with gunshot wounds and other injuries in west Dublin.

The killing is the eighth violent death since the start of the year and the second in the Tallaght area. Last night’s killing was also the second fatal shooting of the year.

The body of the latest murder victim was discovered after a Garda patrol noticed a car acting suspiciously in Tallaght at about 10.30pm.

The car, which was carrying a number of men, sped from the scene close to Bohernabreena Road when they saw the Garda vehicle approaching. A chase ensued during which the other vehicle managed to evade gardaí.

The patrol car then returned to the area where the chase began and found a man’s remains on the ground. He had at least one gunshot wound to the neck and also appeared to have a number of other injuries.

Gardaí are trying to establish if the man’s remains had been dumped at the scene just as the men in the car were interrupted by the gardaí, or if the body was thrown from the car as the chase began.

The area was sealed off immediately after the body was discovered and secured overnight by a manned cordon.

Deputy State Pathologist Dr Michael Curtis visited the scene and carried out a preliminary examination. The body has been removed to hospital in Tallaght where a post mortem will be carried out tomorrow morning.

While the Garda investigation cannot be upgraded from a suspicious death inquiry to a murder probe until the results of the post mortem become available , gardaí believe the man was murdered in an attack with all the hallmarks of a gangland killing.

All of the resources of a murder probe have already been committed to the investigation.

Garda search teams combed the area of the body find and members of the Garda Technical Bureau wcarried out an examination of the immediate scene.

Gardai have made an appeal for information. They have asked anyone in the area of the Foxhill Road /Bohernabreena Road on Saturday between 10pm and 11pm or anyone who saw a silver coloured car in the area, to contact gardaí in Tallaght.

In recent days, Minister for Justice Alan Shatter has said while he hoped the violence of the past fortnight would not continue, he said the killings were unusual events, many of them domestic, that could not have been prevented even if the Garda forced numbered “25,000 or 30,000” members.

The killings began on New Year’s Day when Wayne McQuillan (30) was stabbed to death at a house in Drogheda, Co Louth. A woman is charged with that murder.

Dale Creighton (20) was attacked at the footbridge at St Dominic’s Road, Tallaght, in the early hours of New Year’s Day and later died from his injuries. A number of people have appeared before the courts.

Thomas Horan (63) was murdered in his home at Cambridge Court, Ringsend, south Dublin, in the early hours of Monday, January 6th. A man and woman have been charged with murder.

Christy Daly (47) was found with gunshot wounds in a flooded drain in a field near Clara, Co Offaly, on January 7th. He had been dead for up to 10 days and gardai believe his killing is related to a drugs feud in the Midlands.

Michael O’Dwyer (25) from Kilkenny was stabbed to death in an apartment in Tramore, Co Waterford, in the early hours of January 9th. A man has been charged with murder.

Tom O’Gorman was murdered in his Castleknock home last weekend, with his body found at the property in the early hours of last Sunday, January 12th. A man has been charged.