Claims of 800 babies in septic tank yet to be tested, say Garda sources 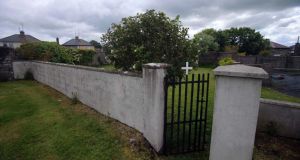 The entrance to the site of a mass grave of hundreds of children who died in the former Bons Secours home for unmarried mothers in Tuam, Co Galway. Photograph: Reuters

Gardaí have begun to examine the circumstances around the discovery of a large quantity of human remains at a site in Tuam, Co Galway.

The outcome of the “scoping exercise”, begun in recent days as controversy around the site has increased, will determine whether a criminal investigation is required.

Garda headquarters said there was no criminal investigation at present because there was no evidence that a crime or anything untoward had taken place.

However, senior sources said the review now under way may change that.

They said it would seek to determine the history of burials at the plot, which are believed to date back to Famine times.

Gardaí carrying out the preliminary probe will also try to establish whether some of remains are those of babies who died while in the care of the mother and baby home in Tuam that operated between the 1920s and 1960s.

A poor house operated in the buildings later used as the mother and baby home, and some of the remains are believed to be linked to it.

Garda sources said while it had been widely reported as fact that 800 babies who died in the home to the 1960s were buried in the plot, this was not clear.

“There seems to be evidence from historical documents that nearly 800 babies died, but whether they were all buried in the patch of land is not known,” said one source.

“And the fact that the babies were buried in a septic tank has also been put forward - but again that has to be tested. We’re looking at this and when we’ve had a close look, checked it out and spoken to people, we will know more then.”

Gardaí said the suggestion the remains of young children and babies were buried on the site arose when the land gave way as two boys were playing there in the 1970s. The movement of earth exposed what looked like the skulls of children.

The grave was blessed and closed again. However, recent research carried out locally has gathered records of the deaths of 796 babies linked to the mother and baby home at the site run by the Bon Secours order.