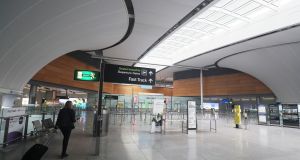 The departures gates at Terminal 2 at Dublin Airport. Gardaí believe they do not have the power to stop those travelling for dentist or medical appointments if they are able to show genuine evidence of the appointment. Photograph: PA

Gardaí do not believe they have the power to stop people travelling abroad for dental appointments or to prosecute those who have already travelled.

This week it emerged Irish people have been booking appointments with Spanish dentists in an apparent attempt to bypass Covid-19 travel restrictions.

Dentists in holiday destinations have reported Irish people booking appointments and asking for a confirmation letter but then never showing up for the procedure.

The current travel rules allow for national and international travel for medical and dentistry reasons.

The difficulties of enforcing restrictions on foreign travel were highlighted on Friday when staff at Dental Clinic Tenerife Sur in Tenerife said they were getting up to 15 emails a day from Irish people looking for appointments.

“The last two weeks have been crazy. They were calling constantly and sending emails,” receptionist Roberta Beccaris said. “The only problem is that they don’t turn up.” The dentist has said it is willing to provide a list of names to gardaí.

He said the Garda had changed its approach. “We warn people that they may be prosecuted if they carry on with their journey and we don’t regard a dentist appointment in Tenerife as being reasonable,” he said.

Those caught travelling to an airport or port for a non-essential journey risk a €500 fine, which will soon be raised to €2,000.

Gardaí are still considering whether to seek lists of names from the dentist. However, they believe would probably be a futile exercise as successful prosecutions would be highly unlikely.

The current interpretation of the law is the offence occurs at the point of departure. This means if someone travels with a genuine dentist appointment, it would be very difficult to later issue a fine even if the person subsequently does not attend the appointment.

“They could just say they were sick on the day of the appointment and were unable to attend,” a source said.

Gardaí believe they also do not have the power to stop more people travelling for dentist or medical appointments if they are able to show genuine evidence of the appointment.

“The law is quite clear. Travel for medical and dentist reasons is allowed. Full stop.” a garda said. “If someone insists on travelling we can’t really stop them, even if we have our doubts about whether they will actually show up for their appointment.”

Gardaí have said they will start pushing back harder on people claiming to travel for dentist appointments but that ultimately there is little they can do to prevent travel.

Holiday-makers continue to make up a tiny proportion of those breaching Covid-19 regulations. “The vast majority of breaches are occurring domestically,” a source said.

Gardaí said they broke up a house party in Longford town on Friday night involving at least 70 people after receiving “countless calls” from concerned locals.

A Garda statement said a “significant number” of Fixed Penalty Notices (FPNs) were issued with regard to the party.

The statement said after gardaí arrived at the property, they were met with “persistent non-engagement from those inside the house”.

“As a result of information received and observations, gardaí obtained a warrant to search the premises under the Misuse of Drugs Act.

“Shortly after 9.30pm, gardaí searched the house and discovered a large group of people present in breach of current Covid–19 Regulations. Gardaí engaged with those present and they eventually dispersed.

“FPNs will be issued to those identified including the organiser and homeowner. A man aged in his 20s was arrested at the scene under the Public Order Acts. Inquiries are ongoing.”