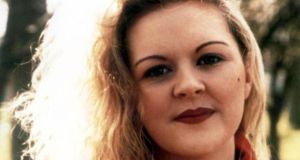 Fiona Pender was last seen alive in Tullamore where she lived almost 20 years ago.

Gardaí have called off a search for the remains of missing woman Fiona Pender after failing to find anything of significance.

The search of a woodland at the edge of a remote forest in the Sleive Bloom mountains in Co Laois started on December 8th.

A Garda spokeswoman confirmed that the search was halted on Saturday but added: “the investigation is ongoing”.

Ms Pender (25) went missing from her flat at Church Street in Tullamore in August 1996. The hairdresser and part-time model was seven months pregnant at the time of her disappearance. Gardaí believe she was murdered and her body buried.

The search, which was carried out close to small car park about 2kms from the village of Rosenallis, which is about 7kms from Mountmellick, was based on new information received by gardaí.

The area is a well-known beauty spot on the Green Road between Rosenallis and Glenbarrow waterfall.

The site is a number of kilometres from a previous 2008 search for Fiona Pender in the Slieve Bloom mountains.

Gardaí deployed a “cadaver dog”, trained to seek out human remains, metal detectors and a range of units including the Technical Bureau, Garda photographers, the dog unit, mappers and site security.

Speaking before the start of the search Chief Superintendent John Scanlan said examination of the area was taking place because “we have a line of enquiry, it takes us to this area.”

Chief Supt Scanlan said the Pender family is anxious to have her home so that they can give her a Christian burial. “Fiona Pender’s family are hopeful and they always retain a hope that someday they will have the opportunity to get Fiona back. We have to be sensitive to their needs,” he remarked.

Over the course of the 18-year investigation five people have been arrested on suspicion of her murder.

Anyone with information in relation to Pender’s disappearance can contact gardaí in Tullamore on 057-9327600 or at the Garda Confidential Line on 1800666 111.