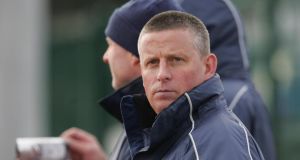 Garda Paul Caffrey was a spectator at the game.

Former Dublin county manager Garda Paul Caffrey told a former player it would be a “good idea” to apologise after an alleged assault that took place during a league match, a court has heard.

Garda Caffrey was giving evidence on the third day of the trial of former Dublin player Brendan McManamon (30), who is accused of breaking an off-duty garda’s jaw on the pitch.

The court also heard evidence from Finbarr Shanahan, the match referee, who said he saw Mr McManamon strike Garda Ledwith to the face.

The case continues before Judge Patricia Ryan and a jury of nine men and three women.