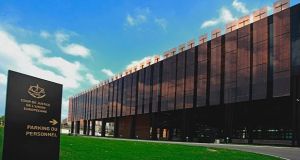 The European Court of Justice (above) has ruled a written exam paper amounts to personal data and can be accessed by the candidate. The judgment is the culmination of a process lasting over eight years. File photograph: Getty Images

The European Court of Justice (ECJ) has ruled that a written exam paper amounts to personal data and can be accessed by its author.

The judgment is the culmination of a legal process lasting more than eight years in which an accountancy student sought a copy of his exam script after failing the test on a number of occasions.

In 2009, Peter Nowak, a student with Chartered Accountants Ireland (CAI), asked to view his exam scripts with a view to challenging the result.

CAI turned him down, claiming the papers did not constitute personal data under data protection legislation.

Mr Nowak then sought assistance from the Data Protection Commissioner, but he was told exam scripts “would not generally constitute personal data”.

This provoked a legal challenge, although Mr Nowak’s efforts were rejected by the Circuit Court and High Court. A subsequent Supreme Court hearing led to the issue being referred to the ECJ for guidance on whether an exam script constituted personal data.

Last July, an opinion document issued by the ECJ Advocate General (opinion documents precede ECJ rulings but do not always reflect eventual outcomes) found the content of exam papers did in fact make for personal data.

The Advocate General told the ECJ the Irish Data Protection Commissioner was wrong to tell Mr Nowak he had no right of access to his failed paper.

On Wednesday, the ECJ upheld that view, stating rights of access to data provided for in European law “may also be asserted in relation to the written answers submitted by a candidate at a professional examination and to any comments made by an examiner with respect to those answers”.

“The court holds that to give a candidate a right of access to those answers and to those comments serves the purpose of the directive of guaranteeing the protection of that candidate’s right to privacy with regard to the processing of data relating to him, irrespective of whether that candidate does or does not also have such a right of access under the national legislation.”

1 Ireland in precarious position as third Covid-19 wave could be more deadly, Nphet warns
2 Austria bids farewell to Fucking after a millennium of misunderstandings
3 Hotels, retail, hairdressers, churches, gyms to open next Tuesday, followed by restaurants and gastropubs on Friday
4 Brexit talks: UK seeks to strip fishermen of 80% of fish caught in EU waters
5 Miriam Lord: Helen McEntee holds up well for someone with barely a leg to stand on
Real news has value SUBSCRIBE