Cigarettes bought outside the EU for as little as €2 sold are sold in Ireland for €4.50 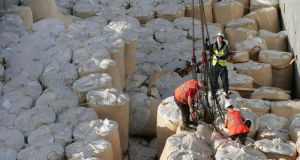 Dockers on board the MV Anne Scan, which sailed from the Phillippines with a consignment of contraband cigarettes estimated to be worth about €50 million.

When the MV Anne Scan was searched by Customs officers in Greenore port in Co Louth in October 2009, it yielded 120 million cigarettes with a retail value of about €50 million. The smuggled consignment was the biggest found in Europe. The ship’s 250m-long hold contained large bags of animal feed – into each one had been placed boxes of 100,000 cigarettes.

“When we took away the animal feed, it took 16 40ft containers to move to the cigarettes,” Liam Irwin of the Revenue Commissioners said.

“Tesco or somebody like that would find that [those logistics] hard to manage. We had to hire trucks to take them away and destroy [the cigarettes].”

Irwin is the most senior figure in Revenue with responsibility for trying to beat the smugglers. With seizures looking set to drop to a 15-year low this year, his job is getting harder.

Drug gangs hit hard in the recession as the demand for recreational drugs plummeted are turning to the booming demand for cheap cigarettes among consumers. The activities of cigarette gangs Irwin and his colleagues try to stop take various forms.

Some “ant” smugglers constantly travel on low-cost airlines to buy packets of cigarettes outside the EU for as little as €2 for a pack of 20. They are then smuggled back to Ireland for sale on the streets for €4.50 – half the retail price.

In larger operations, gangs source counterfeit cigarettes from illegal factories, mainly in China. These are made to look like major brands and can be bought for 50 cents for 20 and sold for €4.50 on the streets.

Other illegal factories abroad produce their own brand of cigarettes specifically for sale on the black market that are even cheaper than 50 cents a pack to buy wholesale. They can be sold here for €4.

Irwin said that with more 40ft containers than ever arriving at major ports being scanned by Revenue’s large X-ray machines, detections had been growing over the past 15 years.

However, smuggling gangs, frustrated at losing their hauls, have sought to combat Revenue’s success and more professional drug gangs are also involved in the trade.

Large orders of cigarettes sourced from illegal factories are then broken up and concealed before being packed into the containers that bring them to Ireland.

“At one time, concealment was barely done but now you’d suspect that the concealment of tobacco is getting as much attention as the concealment of drugs,” said Irwin. “We are seeing things like false ceilings [in containers] or something with lead on top of it to subvert X-ray scanning, that type of thing.”

He also believes large consignments are now being hidden in vans and driven into the State from ferries. To that end, Revenue has recently acquired a “van scan” that can X-ray vehicles. The scanners check if the consistency of the goods transported matches the description in the cargo’s paperwork.

Handheld X-ray devices are being acquired and four new tobacco sniffer dogs have been introduced.

Irwin said the increased sophistication in smuggling methods suggests the involvement of gangs previously involved in drug running, with profits just as big in cigarettes and sentences lower for those who are caught.

He accepted that Revenue needed to become better at mining local communities for information about the criminals that transport and sell the estimated 90,000 packets of black market cigarettes smoked every day in the Republic. This amounts to a daily loss to the State of excise duty and VAT running to €655,000.

“There was a survey done in the North a while back on how seriously people viewed a range of crimes. Illicit cigarettes were below speeding in the survey. It was regarded as not even being a misdemeanour. So that’s what we are up against.”