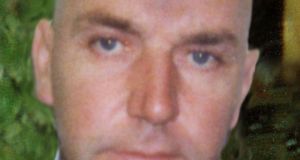 Christy Keane. A man has been charged with involvement in his attempted murder.

A third man has appeared before the Special Criminal Court charged with involvement in the attempted murder of Christy Keane by the Limerick-based McCarthy-Dundon crime gang.

Noel Price (42) of Kileely Road, Kileely, Limerick on Thursday appeared before the three-judge non-jury court where he was charged with, having knowledge of the existence of the McCarthy-Dundon criminal organisation, he assisted in making available a vehicle to that criminal organisation with the intention of facilitating the attempted murder of Christy Keane or being reckless as to same. The offence is alleged to have occurred between June 27th and June 29th 2015.

Detective Garda Barry Moylan of Henry St Garda Station told solicitor Michael O’Donovan for the Director of Public Prosecutions that he arrested Mr Price at 11am on Thursday in a holding cell in the Criminal Courts of Justice building on Parkgate Street in Dublin. He said he explained the charge to him in ordinary language and Mr Price made no comment.

Mr Price, who is already in custody in relation to other matters, will appear again before the Special Criminal Court on Friday June 12th.

On Wednesday John Costello (39) of Hennessy Avenue, Kileely, Co Limerick, appeared before the same court and was charged with knowledge of the existence of a criminal organisation, to wit the McCarthy-Dundon criminal organisation, and that he provided transport to persons with the intention of facilitating the commission of the attempted murder of Mr Christy Keane at the University of Limerick car park on June 29th, 2015.

Larry McCarthy (42) of Tower Lodge, Old Court Road, Limerick City, was charged with making a vehicle available to a criminal organisation, the McCarthy-Dundons, in the attempted murder of Mr Christy Keane, between 27th and 29th of June, 2015. The alleged offences come under Section 72 of the Criminal Justice Act 2006.