The man, who has been living in Ireland for several years, denies membership of any terror group 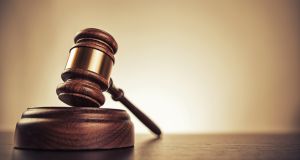 The Supreme Court has reserved judgment on a bid by an Algerian man with alleged links to Islamic terrorism to prevent his deportation.

The deportation order was issued by the Minister for Justice after gardaí­ informed her department that activities of the man and his associates were “of serious concern” and “contrary to the State’s security”.

The State claims the man, who cannot be named for legal reasons, is involved with Islamic terrorism and was convicted of terrorism offences in Algeria and France.

The man, who has been living in Ireland for several years, denies membership of any terror group. He remains in custody here pending the outcome of his appeal against a High Court finding that the Minister’s decision on his case was lawful.

The Minister had decided there were no substantial grounds to find he would be at real risk of ill treatment if deported to Algeria.

Represented by Michael Lynn SC, instructed by Gavin Booth of KRW Law, the man claims, if deported to Algeria, he is at risk of being tortured and subject to inhuman or degrading treatment or punishment in breach of his rights under Article 3 of the European Convention on Human Rights.

Mr Lynn submitted the Minister should have given reasons for her decision to depart from a finding by the Refugee Appeals Tribunal, when considering the man’s application for protection, he was at risk of harm if deported to Algeria.

Country of origin information about Algeria considered by the Refugee Appeals Tribunal stated people detained there can be held “incommunicado” at secret locations for lengthy periods, while reports from human rights organisations stated Algerian authorities were not co-operating with UN rapporteurs on torture and inhuman treatment, counsel said.

The State, represented by Remy Farrell SC, argued the Minister was entitled to arrive at her decision independently from the tribunal findings.

The Supreme Court will address various issues, including if reasons provided by the Minister when making the deportation order, and refusing to revoke it, were a sufficiently lawful basis for those orders. It will also consider whether the Minister was required to notify, and invite submissions on, country of origin material relied upon when deciding to make deportation orders in relation to those found not to be at risk of treatment contrary to Article 3.

Having heard the parties, the Chief Justice said the court was reserving judgment. After Mr Farrell said arrangements would have to be put in place should the court dismiss the appeal, she said the parties would be given a week’s notice of the date of judgment which would be before the end of July.

The man denies involvement in terrorism and claims he is at risk due to his political views. He says he was a supporter, but not a member, of Islamic Salvation Front (FIS), the Algerian political party that seemed destined to win an election there in 1992 before a military coup took place. The FIS was banned after that coup, leading to a decade-long bloody civil war.

During the 1990s the man was convicted of various offences in Algeria for which he received three life sentences and two death sentences. Death sentences are no longer carried out. The offences include forming an armed terrorist group intending to spread murder and sabotage.

Following his arrest in France in 2002, he was found guilty and jailed for eight years there on charges including membership of a criminal organisation preparing an act of terrorism.