Trevor Dixon made no tax returns for 6 years 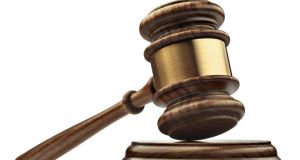 Trevor Dixon (57) from Bray, Co Wicklow, who sprayed buses for Dublin Bus, had pleaded guilty in June to offences including fraudulent evasion of income tax, incorrectly issuing VAT invoices and failing to furnish tax returns between 2002 and 2008.

A spray painter whom the Revenue Commissioners claim owes €1.4 million in income tax and VAT was remanded in custody at the Circuit Criminal Court yesterday.

Trevor Dixon (57) from Bray, Co Wicklow, who sprayed buses for Dublin Bus, had pleaded guilty in June to offences including fraudulent evasion of income tax, incorrectly issuing VAT invoices and failing to furnish tax returns between 2002 and 2008.

At his sentencing hearing, Shane Costello, for the Revenue Commissioners, said the 26 charges against Dixon were a sample of charges.

He said Dixon earned €1.7 million over a period from 1999 to 2008, and based on invoices seized at his home and provided by the company he was subcontracted to, he had charged VAT of more than €300,000 which he never passed on to Revenue.

He should also have paid more than €530,000 in income tax. And he had two workers whom he paid in cash. In total, with interest and surcharges, but excluding penalties, Dixon owed €1.4 million, the court was told.

Aidan Murphy from the Revenue Commissioners confirmed Dixon had been a subcontractor for Freeney Graphics Ltd. His work chiefly involved spraying buses for Dublin Bus for which Freeney’s had the contract. He raised VAT invoices, which the company paid.

Mr Murphy acknowledged that from 2005 to 2008 Freeney’s withheld relevant contracts tax (RCT) from every invoice provided by Dixon which was subsequently paid on to Revenue.

Dixon became an employee of Freeney’s in 2008 as did the two people he had employed, the court was told. But he lost his job in 2009 when the company became aware of the irregularities with his tax.

Laurence Masterson, for Dixon, said his client had pleaded guilty to the charges but was challenging the figure it was claimed he owed. He had been paying 35 per cent RCT on invoices from 2005 to 2008 he said, and he disputed the level of VAT charged. The “family man”, a father of two adult children, was “naive”.

He did not dispute he was guilty, but believed he only owed €61,000. Dixon’s pension, worth €80,000, had already been taken by Revenue and he sought time to produce an accountant who would show his position.

Judge Mary Ellen Ring adjourned the case to December 3rd, but said she would remand Dixon, who had been out on bail, in custody.