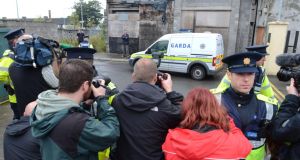 The scene outside Longford Court House early last month as a man was driven away after being charged with the rape of two young girls in Athlone. Photograph: Cyril Byrne/The Irish Times

A man has admitted raping two young girls at a house in Athlone in a crime which shocked the nation.

The 30-year-old father of two has indicated he will plead guilty when his case comes to trial in the Central Criminal Court.

The accused man, who cannot be named for legal reasons, has been in custody at Castlerea Prison since first appearing at Longford District Court on October 1st.

He is charged with twice raping each of the two girls, aged 6 and 9, in Athlone on September 29th.

The girls had been attending a birthday party in the area and the alarm was raised when they were discovered to be missing. It later emerged that they had been raped at a nearby house by a man visiting the locality.

His solicitor, Gearoid Geraghty, had made it clear that no bail was contemplated and, at his request, the accused man had been placed on suicide watch at Castlerea Prison.

On his latest remand hearing at Harristown District Court in Castlerea today, Mr Geraghty told Judge Geoffrey Browne his client had indicated “a certain course of action” to the four charges before the court.

His client was willing to forego the book of evidence in the case and he wanted to know what the attitude of the Director of Public Prosecutions was as he wished to progress matters.

Insp Padraic Jones told the court that, in fairness to the DPP, there was a large volume of information to be considered in the case.

Judge Geoffrey Browne remanded the man in continuing custody at Castlerea Prison. He is due to appear again at Harristown District Court on December 6th.

The accused, who is of no fixed abode, has been on legal aid since his initial court appearance. He had a brief consultation with his solicitor before being led back to the adjoining prison.

Afterwards, Mr Geraghty confirmed his client had waived his right to the book of evidence and that he had indicated he would be pleading guilty to the four charges when the case comes before the Central Criminal Court.

The DPP had been informed of these facts, he said.

The families of the two young girls have already expressed their thanks to gardaí and local people in Athlone for their support.

The parents of both girls expressed their heartfelt appreciation of the gardaí for their support and tireless efforts “at this difficult time”.

“The compassion and professionalism of the gardaí has been a source of great comfort for us and, more importantly for our precious little daughters,” they said in a statement.

“The other professional care providers have also helped us to begin to find our way through this challenging period.

“Finally, we would also like to recognise the kindness and practical support that we have received from the people of Athlone. The level of public empathy and practical assistance has been immense and again it has been a source of comfort to us all at this most difficult time,” the parents said.

1 Coronavirus: President Higgins message to be broadcast on local radio stations
2 Coronavirus: Trump’s tone changes as US faces brutal loss of life
3 Coronavirus: Should everybody be wearing masks to combat Covid-19?
4 ‘Everyone still thinks it’s a joke’ - parents of toddler with coronavirus speak out
5 Coronavirus: Westmeath has highest rate of Covid-19 outside of Dublin
Real news has value SUBSCRIBE