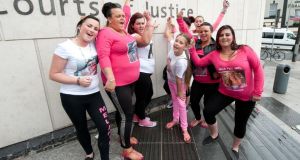 Friends and family of Melanie McCarthy McNamara’s celebrate outside the Central Criminal Court today after Keith Hall was jailed for her manslaughter. Photograph: Collins Courts.

A Dublin man has been sentenced to 20 years in prison for killing 16-year-old Melanie McCarthy McNamara, who was shot while sitting in car in Dublin last year.

Keith Hall (24) of Kilmartin Drive, Tallaght pleaded not guilty to murder but guilty to the manslaughter of Ms McCarthy McNamara in Tallaght on February 8th, 2012.

Brendan Grehan SC prosecuting told the Central Criminal Court the plea was acceptable to the Director of Public Prosecutions.

Today, Mr Justice Paul Carney handed down a 20-year jail-term refusing a request by defence counsel to suspend any part of the sentence and backdated it to February 21st, 2012.

The court heard that father-of-one Hall was a heroin addict with 111 previous convictions dating back to when he was 14 years old, including theft, burglary, drugs and road traffic offences.

There was loud cheering by members of the deceased’s family after the sentence was handed down.

In a victim impact statement read to the court on a behalf of the family, Ms McCarthy McNamara’s godmother, Jennifer Roche, said she loved life but never had a chance to live it.

Detective Superintendent Brian Sutton told Mr Grehan that Ms McCarthy McNamara was sitting in a Nissan Primera car with her boyfriend and his friend in Brookview Way at around 10.32pm on February 7th.

A black Santa Fe pulled up and a sawn-off shotgun was discharged into the rear passenger seat of the Primera, the court heard.

Ms McCarthy was shot in the head and was driven in the car to Tallaght Hospital but she died of her injuries at 1.15am the next morning.

The court heard the Santa Fe had been stolen in Rathgar and had licences plates taken from the same type of vehicle. The shotgun had also been stolen a year earlier in Co Kildare but its owner said it had not been sawn-off when it was taken. The black SUV was later found was at a bus terminus in City West.

Hall told gardai Ms McCarthy McNamara’s boyfriend and another man were the intended victims of the attack. He said his role was to throw a rock at the window of the house to lure the occupants out of it and he helped dispose of the gun when the Santa Fe ran out of petrol at City West.

Hall told gardai his motive was that he had been assaulted a week before the incident.

Gardai arrested Hall a week later after he was caught on CCTV getting out of the Santa Fe in City West.

Det Supt Sutton said he was interviewed 21 times and made admissions but he told Caroline Biggs SC, defending, that he did not give a full account until the end. He told us the truth but he drip-fed us, she said.

Ms Biggs said that her client was heavily intoxicated at the time of the incident after taking diazepam, crack, cocaine and cannabis.

Dr Khalid Jabbar, who conducted the postmortem, said the cause of death was a gunshot wound to the head.

Speaking outside court, Ms Roche she said she was pleased with the sentence handed down to Hall for the manslaughter of her goddaughter.

“It’s the best news I’ve got in my whole entire life. I’m delighted that Judge Carney found it in his comfort to give him 20 years, I’m going to celebrate for the week, “said Ms Roche.

“Melanie was perfect to us in every way. She would never say no to nobody,” she said.

She spoke of how she felt shattered after hearing the news that her goddaughter had been killed. “It was like my world shattered, I’ll never get over it,” said Ms Roche.

The deceased’s grandmother Frances McNamara also welcomed the sentence. “I just couldn’t take my eyes off of him, that he was sitting right next to me and that he took our child’s life away from us,” she said. “Nothing will ever bring her backbut I felt we got justice for her today.”