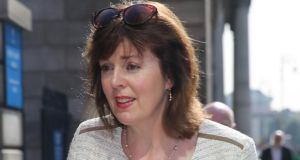 A High Court jury hearing a defamation action by a businessman against Sunday Times columnist Brenda Power and the newspaper was sent home tonight and will continue deliberations tomorrow.

After over five hours considering a verdict, the jury foreman told Mr Justice Eamon deValera at about 8pm they might be able to reach a verdict in the morning.

John McCauley (46), a property consultant originally from Donegal now based in Dubai and Lithuania, is suing over a article in which Ms Power criticised him for taking a midwife to court over interruption of his filming of the birth of his first child.

The March 2009 article arose from publicity surrounding an unsuccessful Circuit Court case by Mr McCauley against midwife Irish Halbach and Mount Carmel Hospital in Dublin alleging Ms Halbach had acted unreasonably by stopping him filming just after his daughter Simone’s birth by C-section in 2006.

He claims Ms Power’s column portrayed him as “some kind of head case running around with a camera”. The defendants deny defamation and have pleaded the article was true and was fair comment.