Woman left permanently disabled with severe back and other injuries, High Court told 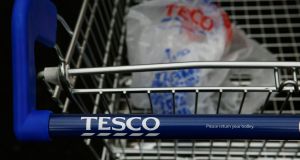 Woman said she fell in the fruit section of the Kilrush Tesco store. She said her legs shot out from under her, she hit the ground and was unable to get up afterwards. Photograph: Luke MacGregor/files

A woman left permanently disabled with severe back and other injuries after slipping on grapes while shopping in a Tesco store has been awarded €1.4 million damages by a High Court judge.

Mr Justice Anthony Barr made the award to Patricia Walsh (48), Shannondale Stud, Rehy, Carrigaholt, Co Clare, over the incident in the Tesco store at Kilrush, Co Clare, on August 28th 2012.

A stay applies on the award pending an appeal on condition that €500,000 is paid out now, plus 75 per cent of Ms Walsh’s legal costs.

Ms Walsh, represented by Edward Walsh SC and Pat Quinn SC, sued Tesco Ireland which admitted liability on the first day of the case. It ran for seven days and involved evidence from 15 doctors among others.

In his detailed judgment, the judge said it was clear that as a result of the fall, Ms Walsh suffered a serious injury to the muscles and ligaments of her lower back which caused her to experience severe pain in her lower back, radiating into her lower leg.

He was satisfied that she had suffered permanent back and bladder injuries rendering her “grossly disabled in all aspects of her life”.

She underwent a range of treatments here and in the UK, culminating in the insertion of a spinal cord stimulator in February 2015. While that gave her considerable relief, she continued to have constant pain daily and doctors believed she would also need ongoing treatment with rhizotomies.

A significant injury to her bladder requires her to self-caterise three times a day and also suffered psychiatric and psychological consequences from her injuries, he found.

She was unfit to return to her pre-accident work as a secretary/receptionist and, on the balance of probabilities, would not be fit to return to work again. he also held

Formerly an active sportswoman who played GAA with Co Clare and Munster, Ms Walsh is unable to participate in sports and dancing with her young daughters, especially to ride horses, and finds that very distressing, he added.

He accepted her evidence that lower back injuries experienced after she fell in a farm yard in 2008 had resolved completely for four years before the fall in the Tesco store.

Videos of Ms Walsh taken for Tesco by a private investigator did not disclose her engaging in any activity that was inconsistent with her evidence, he said. The video showed her going into a health centre walking with a limp, he noted.

Tesco had also asked her about images from her Facebook page of her attending a One Direction concert with her children in Croke Park and he accepted her evidence she wanted to give her children some “happy memories from childhood” and had paid for that with pain in the days afterwards.

In evidence to the court, Ms Walsh said she fell in the fruit section of the Kilrush store. She said her legs shot out from under her, she hit the ground and was unable to get up afterwards.

A business studies graduate from Tralee IT, she previously worked in the US for Unilever and Philip Morris before returning to Ireland in 2001 where she worked with Musgrave’s for a time. Ms Walsh previously played football with the Clare and Munster teams and was part of the Munster team that won the Railway Cup on three occasions.

In a statement after today’s ruling, Carmody and Co, solicitors for Ms Walsh, said she was “happy and relieved” at the outcome.