‘Unfortunately, I probably will not be here much longer’, says Lynsey Bennett 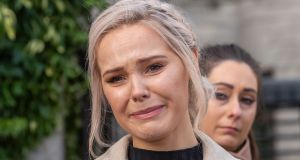 Lynsey Bennett, of Killoe, Co Longford, speaking outside court. She said she can now focus on her own fight to stay alive for as long as she can. Photograph: Collins Courts

A 32-year-old mother of two who is seriously ill with cervical cancer has settled her High Court action over the alleged misinterpretation of her cervical smear slides.

Lynsey Bennett sobbed as a letter of regret was read out in the High Court on Wednesday from the head of the CervicalCheck national screening programme.

In it CervicalCheck CEO Fiona Murphy said she wished on behalf of the CervicalCheck programme “ to express our deep regret” to Ms Bennett and her family.

“I wish to acknowledge the many challenges that you have faced as a result of your diagnosis. I appreciate that this has been a very difficult time for you and your family and I hope you find some solace with the conclusion of this process,” she added.

She hoped the settlement will give Ms Bennett and her family “some level of comfort, peace of mind and security.”

She had a smear test on February 3rd, 2010 which was sent to Eurofins Biomnis in Dublin. The test it was claimed came back as negative and another smear test was recommended in three years.

On December 16th, 2013 Ms Bennett had another smear test as part of the national cervical screening programme. This sample was sent to US lab Quest Diagnostics and it was claimed came back as showing atypical squamous cells of undetermined significance. A smear test in twelve months was recommended.

On December 2nd, 2014 Ms Bennett had another smear test and the sample was reviewed by Quest Diagnostics. It is claimed the result came back negative and she was advised by CervicalCheck a repeat smear in a year was recommended.

It is claimed Ms Bennett had another smear test in January 2016 which was tested at the US laboratory Quest Diagnostics and she was told no abnormalities had been detected and she would be reminded to have her routine smear test in three years time.

Eleven months later it is claimed she went to her GP complaining of bleeding and was referred to hospital.

In January 2017, invasive cervical cancer was diagnosed, and Ms Bennett had to have a hysterectomy and other surgery.

In March 2018, she was found to have a recurrence of the cervical cancer.

It is alleged there was a failure to correctly report or diagnose Ms Bennett’s smear samples and an alleged misinterpretation of the samples.

Ms Bennett’s cancer it was claimed was allowed to develop and spread unidentified, unmonitored and untreated until she was diagnosed with cervical cancer in January 2017.

Her counsel Jeremy Maher SC instructed by solicitor Gillian O’Mahony told the court Ms Bennett had secured the future for her children. A trust will now be set up for the children.

Outside court Ms Bennett said she can now focus on her own fight to stay alive for as long as she can.

She said she was relieved that her legal battle was over and she has security for her girls and their future. “Unfortunately, I probably will not be here much longer. It is just I will be able to have some peace knowing it is sorted.”

Flanked by her solicitor she said she hoped she had done enough for her two daughters Zoe (12) and Hailee (7).

In a statement she said: “To my daughters Zoe and Hailee, I hope I have done enough to secure you both a future free of financial worries and that even with me not here to guide you, you can both pursue your dreams.

She cried as she stated: : “And always remember, Mammy loves you. X”