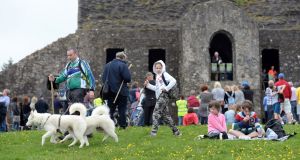 A local residents group is seeking leave from the High Court to bring proceedings aimed at overturning permission for a €15 million visitor centre at Dublin’s Hell Fire club.

The action by Hellfire Massy Residents Association (HMRA) concerns An Bord Pleanála’s grant of permission to South Dublin County Council to develop a visitor centre in the Dublin mountains at the Massy’s Wood estate and Montpelier Hill.

The site includes the Hell Fire club, a protected structure and national monument built around 1725.

The project is being developed in co-operation with Coillte and the Dublin Mountains Partnership.

When the case came before Mr Justice Richard Humphreys this week, he agreed, at the request of John Kenny BL, instructed by solicitor Brian Harrington, for the HMRA, to adjourn to next week the application for leave to bring it.

In the intended judicial review proceedings against the board, the Minister for Housing, Planning and Local Government, and the State, the residents assocation wants orders quashing the board’s permission, granted last June, for a visitors centre, car park and associated works at Montpelier Hill.

It claims the proposed development will, if built, function as a visitor’s hub for the Dublin and Wicklow mountains and “profoundly change” the way the population of the greater Dublin region interacts with the upland areas to the south of the city.

They claim it will alter the type, intensity, mix and balance of the visitors that arrive to visit Montpelier Hill, the Natura 2000 sites in close proximity and Massy’s Wood across the road.

The association says it is not opposed to development on Montpelier Hill but believes the development as proposed will have “profound” and “inadequately assessed” environmental consequences.

It claims the council does not know how many people currently use the site and no basis was provided for Coillte’s estimate three years ago of about 100,000 users annually or for the council’s calculation the centre is likely to attract about 300,000 visitors annually.

The HMRA fears the proposed centre will be used by visitors as a gateway for accessing the mountains trail network and claims this effect has not been assessed.

Much of its dispute with the council is predicated upon an assessment of how much disturbance will be caused by visitors to sensitive ecological receptors in the development area, the association says.

The problem is the current and future level of disturbance of the site caused by recreational users cannot be calculated because of the lack of clarity over user numbers, it says.

This uncertainty “fatally undermines” the planning application because, with just a “bald” assumption as to future usage by visitors, it is impossible to reach conclusions as to levels of disturbance for the purposes of the Environmental Impact Assessment and Habitats Directive.

It is claimed the board, in granting permission, failed to consider adequately or at all, as required by the Directives, the impacts on natural habitats, bats, red squirrels, otters and the Marsh Frittilary butterfly.

It also claims the board erred in law in conducting a stage two appropriate assessment that concluded there would be no significant effects from the development on qualifying interests of the Wicklow Mountains Special Area of Conservation and Special Protection Area.

The case against the State includes claims section 175 of the Planning and Development Act, which requires further information relating to a planning application by a local authority be published via newspaper notice, does not vindicate observers’ rights to effective public participation in the planning process.