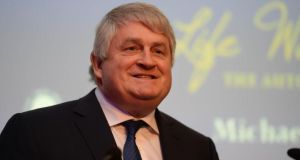 The Red Flag consulting firm being sued by Denis O’Brien has confirmed it had a client for a dossier of material relating to the businessman which he alleges is part of a conspiracy to damage him, the High Court has heard.

The firm has refused to disclose the client’s identity, it was stated.

A draft speech of Fianna Fáil TD Colm Keaveney, which was included in a dossier of material sent last month to Mr O’Brien, was not commissioned by a client, the court also heard.

Maurice Collins SC, for Red Flag, said the Keaveney speech was “provided to us to look at it, effectively on an informal basis”.

While Red Flag chief executive Karl Brophy and chairman Seamus Conboy had edited some aspects of that speech, the fact was all their suggested changes were, for reasons “unknown”, rejected by Mr Keaveney, counsel added.

Counsel was responding to earlier remarks by Michael Cush SC, for Mr O’Brien, that the Keaveney draft speech was commissioned by a client.

Mr Cush said his side contended Red Flag was involved in inputting words and phrases into the Keaveney speech which was envisaged as then being delivered under privilege in the Dáil and “hugely condemnatory” of Mr O’Brien.

Mr Keaveney had publicly said he did not use that material and that the speech delivered by him was his own, counsel said. That was “a separate debate to be had”.

Mr Justice Colm MacEochaidh refused an application by two employees of Red Flag - account manager Brid Murphy and account executive Kevin Hiney - for a stay on orders requiring them hand over, for forensic imaging, their personal devices used for work.

The two sought the stay pending their appeal against the imaging orders. They argue the orders involved a “gross invasion” of their privacy as the devices at issue contain much personal material, including text messages, emails, financial and medical information. The devices at issue were never used for creating, editing, reviewing or storing any of the dossier material, they also said.

Refusing the stay, the judge said it would effectively amount to unwinding the imaging orders carefully made by him on November 2nd. The two could renew their stay application to the Court of Appeal, he added.

He said the November 2nd orders tried to balance the defendants’ rights to privacy with Mr O’Brien’s right to orders protecting his litigation. In balancing those rights, he had noted, due to cloud computing and other advances, there was an “unavoidable interface” between personal data and work accounts.

The imaging orders provide for a “limited” invasion of privacy and Mr O’Brien will not see anything of the material unless the court decides so in the future, he added.

He accepted arguments on behalf of Mr O’Brien of a possibility of innocent deletion of material that may not be detected.

There was no sworn statement by the two that there was no communication on their devices between them and the client and that “tilts the balance” a little more in favour of Mr O’Brien, he said.

The November 2nd orders require the two, along with Mr Brophy, Mr Conboy and non-executive director Gavin O’Reilly and others hand over devices for forensic imaging of the material on them. The material will be stored by an independent solicitor and cannot be inspected by Mr O’Brien’s side unless the court grants his inspection application at a hearing on December 8th.

In seeking the stay, Mr Collins said that even if Mr O’Brien was ultimately not permitted inspect the material, the imaging would have involved an “unwarranted, disproportionate and irreversible” invasion of privacy.

Ms Murphy, in a sworn statement on behalf of herself and Mr Hiney, said their devices were not used for creating, editing, reviewing or storing the dossier and both also undertook not to delete may material pending their appeal, counsel added.

Opposing the stay application, Mr Cush said Ms Murphy and Mr Hiney had said their devices were not used for creating, editing, reviewing or storing the dossier but had not indicated to whom the dossier material was sent or transmitted.

The orders were merely “preservative” of Mr O’Brien’s rights and he would never get to see the material unless there was a further order of the court, he said.

Counsel said Red Flag had confirmed there was a client for the dossier but it was protecting that client’s confidentiality and not revealing it to Mr O’Brien. The sworn statement by Ms Murphy did not refer to any dissemination of material to the client and this was among the reasons his side was opposing the stay, he said.

When the judge remarked it seemed the “real purpose” of this litigation was to identify the client, Mr Cush said there was no doubt his side was “definitely interested” in that but Mr O’Brien was also interested in the alleged wrongs of Red Flag.