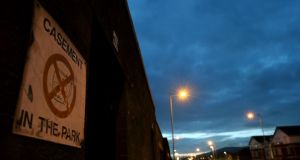 A sign outside Casement Park in Belfast. Photograph: Brian Lawless/PA

The granting of planning permission for a new 38,000-seater GAA stadium in the heart of west Belfast is to be quashed, a High Court judge has ruled.

Mr Justice Horner has confirmed he was overturning Environment Minister Mark H Durkan decision to approve the £77 million Casement Park redevelopment despite being urged to consider other options.

Reasons for his decision will be given Friday morning.

In a statement the Casement Park Project Board said that, “whilst we are disappointed with the judgment we are fully committed to transforming Casement Park and building a provincial stadium for Ulster which will provide a longstanding legacy for Gaelic Games as well as significant, social and economic benefits. We welcome that the judgment found the siting, size and scale of the Casement Park development were not contrary to planning policy. There is a strong resolve within the GAA to submit a new planning application in 2015 which will again follow the due process and scrutiny of the Department of the Environment.”

Earlier this week Mr Justice Horner declared the process unlawful due to fundamental flaws in the environmental impact assessment of the expanding facilities. Planners placed an unrealistic reliance on an existing 32,600 capacity as a baseline for the project, the judge held. With far fewer spectators attending matches at the current ground, the effect of bigger crowds on the surrounding roads network was not properly examined.

Lawyers representing the Department of the Environment, the GAA and a residents’ group who mounted the successful legal challenge, returned to court to decide on the issue of remedies.

Members of the Mooreland and Owenvarragh Residents’ Association (MORA) once again packed the public gallery to hear the outcome. Their barrister, David Scoffield QC argued that the inadequacies identified in the planning process meant anything short of quashing the decision to give the go-ahead for the construction scheme would be unjust.

Dr Tony McGleenan QC, for the Planning Service, contended that the residents had not won on every ground of challenge.

He set out the five areas which drew judicial criticism.

:: A failure to inform the Minister about police safety concerns.

:: No assessment of the impact on local residents of extra stadium facilities such as conference suites, bars, restaurants and car parking.

:: Issues about the presence of Japanese knotweed.

:: A failure to engage with home owners about mitigating the risk of any asbestos escaping from the site during demolition and building work.

According to Dr McGleenan, some of these points alone would not be serious enough to merit the “extreme option” of quashing the Minister’s decision.

Instead, he asked the judge to consider alternatives such as simply issuing a declaration or else ordering the planning application be reconsidered.

But Mr Scoffield insisted the GAA would then be free to commence development work immediately without any fear of breaching planning regulations.

Having heard the submissions, Mr Justice Horner confirmed: “I have decided to quash the decision, despite the careful, considered submissions of Dr McGleenan.”