No stay on order preventing work on Moore Street 1916 site 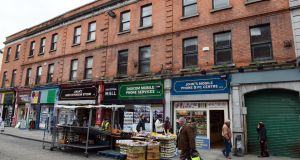 A judge refused to grant a stay on his orders preventing works to buildings and locations on and around Moore Street declared to be a national monument. Photograph: Eric Luke / The Irish Times

A High Court judge has refused to grant any stay on his orders preventing works to buildings and locations on and around Dublin’s Moore Street declared to be a 1916 Rising “battlefield site” comprising a national monument.

Certain conservation works by the Minister for Arts and Heritage have been permitted by Mr Justice Max Barrett to a terrace on Moore Street.

A stay on some of the court’s orders was sought by Chartered Land, which secured permission some years ago for a major residential and commercial development in the area around Moore Street.

Shane Murphy SC, for the developer, said it wanted the stay because the court’s orders prevented any works in the area.

While his client would undertake not to demolish the buildings at issue, it was concerned there may be a need to carry out repairs to locations or utility works, he said.

Conleth Bradley SC, for Colm Moore, a nominee of the 1916 Relatives Association, opposed any stay and said he was concerned that could reverse the judge’s decision on a national monument.

It was not at all clear what “the next step” would be in the case and whether there would be an appeal, he added.

The State was being “silent” and had all the way through the case maintained the Minister has no role in relation to designating a national monument, he said.

The judge said the Minister for Heritage and Chartered Land were both entitled to appeal his decision last month that the wider Moore Street area comprised a national monument but he would not grant the stay as sought by Chartered Land.

He did grant an application by Michael McDowell SC, for the Minister, which allows for carrying out urgent conservation and repair works to a terrace of buildings at Nos 14 to 17 and for the removal, in line with the court’s orders, of a large vinyl banner affixed to the front of that terrace.

The judge also granted costs of the case to Mr Moore against the Minister but made no order for costs against Chartered Land, meaning it pays its own costs.

Both the Minister and developer have 28 days from now to bring any appeal.

When Mr Bradley thanked the judge for the manner in which he conducted the case and delivered his 400-page judgment within days of the hearing concluding, the judge said it was “easily the most enjoyable” case he had heard to date.

Mr Moore had brought various proceedings against the Minister aimed at securing protection for a wider battlefield site in the area. Chartered Land was later joined to the case.

The Minister disputed any such wider battlefield site existed and argued it was adequate to protect a terrace of buildings at Nos 14-17 where it is intended to establish a 1916 Rising Commemorative Centre.

In his judgment, Mr Justice Barrett said the 1916 Rising is “unique” and the GPO occupies an iconic position in Irish history making what happened to the men and women who fled the GPO when it was ablaze “a matter worthy of unique commemoration”.

Some of the buildings at issue were due for demolition as part of the Chartered Land proposed development.

The judge set out links between the Rising and the buildings and locations at issue. These included No 10 Moore St, where Nurse Elizabeth O’Farrell helped treat several members of the provisional government, including the wounded James Connolly, in the retreat from the burning GPO on April 28th 1916.

The judge noted the O’Rahilly was wounded while leading rebels up Moore Street and died on what is now O’Rahilly Parade. The bodies of four or five civilians shot by the British lay on the street overnight and anecdotal evidence suggested Patrick Pearse’s decision to surrender may have been influenced after seeing those civilian dead, the judge said.