Justice Denis McDonald ‘really delighted’ the case has been resolved 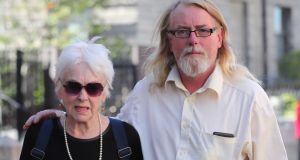 A woman and her son, who was adopted illegally, have settled – on confidential terms – their High Court action against a Catholic adoption agency and the State.

Tressa Reeves, neé Donnelly, and her son, Patrick (Paddy) Farrell, also known as André Donnelly, had sued St Patrick’s Guild (Incorporated) adoption society, which was run by the Sisters of Charity, and the State, arising out of her long search for him following his illegal adoption in 1961.

Following lengthy talks on Wednesday, the fourth day of the hearing, Eanna Mulloy SC, instructed by Neil Cosgrave solicitor, for the mother and son, told the court the parties had reached “a comprehensive agreement”.

Mr Justice Denis McDonald said he was “really delighted” the case had been resolved and agreed to strike out the proceedings, with liberty to apply to have it re-entered.

The court had heard Mrs Reeves gave birth to Mr Farrell at a clinic in Dublin on March 13th, 1961. He was placed days later with a family at Liscolman, Tullow, Co Carlow and the now deceased Jim and Maeve Farrell gave him the name Patrick Farrell.

Mrs Reeves spent decades looking for him and they were finally reunited in 2013. Mr Farrell did not know he was illegally adopted until late in 2012, some months after Maeve Farrell’s death.

The court heard Maeve Farrell had expressed strong opposition to a nun at St Patrick’s to him being told about his true origins or that his birth mother was searching for him. The nun had recorded details of contact she had with Ms Farrell informing her Mrs Reeves wanted to make contact with him.

Correspondence between the Guild and Mrs Farrell noted Mrs Farrell had described Patrick as being vulnerable, was against telling him he was adopted and had said he had moved to Australia.

Mr Farrell said he has never been to Australia. In the action, Mrs Reeves, now living in Cornwall in England, claimed she was given the “brush off” by St Patrick’s and others in authority when she sought to make contact with him.

The court was told Mrs Reeves came from a “respectable” Catholic English family with Irish connections and was sent to Ireland after she became pregnant in 1960.

She gave birth to her son at the Marie Clinic in Dublin in March 1961 and called him André hoping she would be able to find him some day as he would be the “only André in Ireland”.

During her long search, she claimed she was told by a nun that adopted children don’t look for their birth parents and he had been likely sent to America. She eventually learned in 1997 he had been placed with an Irish family but, despite her requests, was not given information that would allow her to make contact with him.

Mr Farrell was made aware of his true origins only in 2012. He told the court Maeve Farrell had doted on him but Jim Farrell regularly subjected him to physical violence.

Both Mr Farrell (57) and Mrs Reeves (79) claimed his adoption was unlawful and his placement with the Farrells was done without the legal safeguards provided under the adoption laws. They claimed false birth and baptism certs were procured in respect of baby André, and sought damages including for alleged false misrepresentations made concerning Patrick’s location, failure to provide them with information about each other in a timely manner and failure to protect their family rights. The claims were denied.

The society, represented by Felix McEnroy SC, said it did not make any false misrepresentations or try to thwart Mrs Reeves’s effort to trace her son. The State parties, represented by John Rogers SC, claimed they were strangers to the claims and not liable for any wrongs committed against the plaintiffs.