Man settles case for €3.5m over care by Rotunda at birth 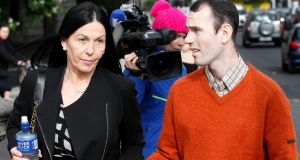 Leon Keogh of Castletimon Road, Kilmore, Dublin, and his mother Natalie O’Hanlon outside the High Court where they settled their case against the Rotunda maternity hospital in Dublin over the circumstances of his birth and his care in December, 1991. Photograph: Collins Courts.

A 24-year-old man who had sued the Rotunda Hospital over his care at the time of his birth has settled his High Court action for €3.5million.

Leon Keogh, Castletimon Road, Kilmore, Dublin 5 had through his mother Natalie O’Hanlon sued the Dublin maternity hospital over the circumstances of his birth and his care on December 21st, 1991.

It was further claimed there was an alleged failure to deliver or expedite delivery at the first possible opportunity when it was allegedly clear the foetus was in distress.

When the baby was born it was claimed that he required resuscitation and had a brain injury.

The claims were denied and the settlement was without an admission of liability.

Mr Keogh’s senior counsel Denis McCullough told the court there was a controversy in the case between the experts on both sides and the offer was made in the case after mediation.

He said Mr Keogh has cognitive difficulties and loves to listen to music.

Approving the settlement Mr Justice Kevin Cross said it was a very good one and it represented about 50 per cent of the full claim in the case. He said Mr Keogh’s mother and step-father are owed a deep gratitude from the country for looking after him and he hoped the settlement would offer them some comfort.