Mary Walsh claims advice given by the former operator after €3.3m win was negligent 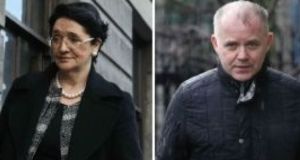 A woman who was taken to court by her stepson for a share in a 2011 €3.3 million Lotto win wants to sue the former operator of the National Lottery for alleged negligence.

Mary Walsh claims she was given negligent advice following the win by the then operators of the Lotto, An Post National Lottery Company (APNLC), which went into voluntary liquidation in 2014.

She alleges she was given certain advice by a representative of the National Lottery when she went to collect what she claims were her winnings in 2011.

She claims the advice was, if she wished to make gifts to anyone, those persons should sign the winning ticket if those gifts were to be exempted from taxation. As a result, she claims she and five others, including her stepson David Walsh, signed the winning ticket.

That resulted in proceedings being brought against her by Mr Walsh – proceedings which were ultimately settled.

The court also heard she is subject of separate but related proceedings from another signatory of the winning ticket, Kevin Black, her late husband’s nephew.

In her proposed action against APNLC, she claims certain advice given by the operator was negligent, the full implications of that advice were never explained to her, and she is entitled to damages .

The company went into liquidation after another entity was awarded the licence to operate the National Lottery.

Represented by John Shortt SC, with Martin Durack, Mrs Walsh wants permission from the High Court to sue the former operator, which she requires because it is in liquidation.

Opposing the application, Garret Byrne, for the company, said the application for permission to sue the company should have been brought when the proceedings were initiated in 2016 and Mrs Walsh cannot retrospectively seek to bring her claim against the company.

In light of the High Court judgment in David Walsh’s proceedings, which went against Mrs Walsh and was highly critical of her, she cannot seek to bring this claim against the company and it was also “bound to fail”, counsel argued.

In reply, Mr Shortt said his client had changed solicitors from the time the claim against the lottery operator was first lodged and should be allowed bring her claim. Ms Justice Teresa Pilkington said she hoped to give her decision as soon as possible.

In 2017, the High Court’s Mr Justice Richard Humphreys ruled Mrs Walsh had to pay David Walsh €560,000 plus his legal costs after finding he was a part owner of and entitled to a one-sixth share of a winning ticket purchased in Ballinasloe, Co Galway, in January 2011.

Mrs Walsh appealed that decision to the Court of Appeal which was told in 2018 the action was “resolved entirely”. As part of the settlement, her appeal was allowed.

Promise of being looked after

Mr Walsh, of Knocknagreena, Ballinasloe, had sued Mrs Walsh, of Monksland, Athlone Co Roscommon arguing he was entitled to his share, approximately €560,000, of the win on the grounds his signature was among six written on the back of the winning ticket.

He claimed his late father had told him, shortly after the win, he would be looked after and would not have to worry about money again. He claimed he did not get his share.

Mrs Walsh, who was married to David’s father, Peter Walsh, who died in December 2011, denied this and argued the winning ticket was her’s. She claimed that David Walsh was offered and accepted her and her late husband’s house in lieu of €200,000 from the win.David Walsh denied that.

He said Mrs Walsh’s evidence was inconsistent, “not credible”, contained “self-contradiction” and was “unreliable”.