Judge tells lawyers to ‘think outside the box’ during pandemic 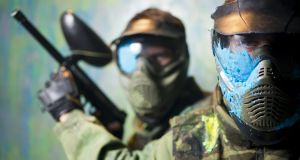 Daniel Nolan has claimed he was injured while playing paintball.

A High Court judge has told lawyers to “think outside the box” when bringing personal injuries cases to court during the pandemic.

The call came as a second personal injury action did not open in the High Court as the courtroom assigned would have been over capacity under Covid-19 regulations.

Mr Justice Michael Hanna was speaking as the case of a 24-year-old man, who has claimed he was injured while playing paintball, was adjourned as the combined personnel numbers on opposing sides meant the maximum capacity set for the courtroom, 11 people, could be exceeded.

Two weeks ago, another personal injury action was adjourned after being assigned to the same courtroom.

In the latest case, Daniel Nolan, who claims he lost central vision in an eye, has sued in relation to the alleged incident two years ago.

Richard Kean SC, instructed by solicitor David Harrington, told the judge both sides needed their legal teams, experts and witnesses in court and that would bring the courtroom over the capacity allowed.

Liability was very much at issue in the case, counsel said.

He said there could be a situation where a daily transcript of the evidence was given to all those involved but that would be a “nonsensical” situation as regards cost.

Mr Justice Hanna said he disagreed. He said we are in the middle of a pandemic, getting an action to hearing was something “to be cherished”.

He also referred to the “snail’s pace of a backlog” in relation to personal injuries cases.

The judge said he wished to abide by the regulations which set the maximum capacity for his courtroom at eleven including the judge, registrar, stenographer, a member of the press, legal teams for both sides, and the parties involved.

He said solicitors might be able to set up a room where witnesses can hear evidence without being in the courtroom and legal teams “have to start to think outside the box.”

Mr Nolan says he was attending a paintball session with work colleagues when, it is claimed, he sustained a significant eye injury.

He has claimed he was provided with protective glasses in an allegedly dangerous and defective condition.

He has claimed the protective eyewear allegedly constantly fogged up, preventing him being able to see and there was alleged failure to take the paintball gun from him when the instructor allegedly directed him to remove his goggles and wipe them.

Mr Nolan has also claimed alleged failure to instruct him adequately or at all in respect of the safe operation of the paintball gun.

The claims are denied and it is contended by the paintball company that Mr Nolan signed a disclaimer undertaking to wear his protective eyewear at all times in the play area.

It is further contended Mr Nolan allegedly removed his protective eyewear in contravention of the extensive and repeated safety instructions given to him and he was the author of his own misfortune.

The case is not likely to come back before the court for another four weeks.