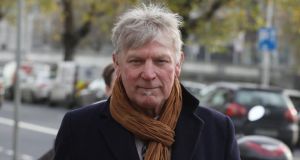 The High Court has lifted an injunction against a former Church of Scientology member that prevented him from harassing two of its members.

Mr Justice Seamus Noonan said that Peter Griffiths had apologised and accepted it was wrong to follow Zabrina Collins and Michael O’Donnell when they delivered Scientology-funded Truth about Drugs leaflets in Dublin on December 20th, 2014, and that Mr Griffiths’s codefendant, John McGhee, had been responsible for most of the harassment.

Mr Griffiths, of Teeling Street, Ballina, Co Mayo, had appealed over an injunction first granted a few days after the 2014 incident. It prevented him and Mr McGhee harassing or videoing Ms Collins, a Church of Scientology director originally from Co Donegal and now living in Tyrrelstown, in north Dublin, or Mr O’Donnell, of Cherrywood Lawn, in Clondalkin in west Dublin. The injunction was made perpetual when the case moved from the High Court to the Circuit Court.

Lifting the injunction on Wednesday, Mr Justice Noonan said the test for a perpetual injunction was whether a substantial risk of danger existed. In this case only one incident had been complained of, the following around of Ms Collins and Mr O’Donnell as they delivered leaflets in 2014 for half an hour.

Ms Collins and Mr O’Donnell had been awarded damages for harassment and assault – €3,500 against Mr McGhee and €2,000 against Mr Griffiths – over that incident. Costs issues were adjourned for two weeks.