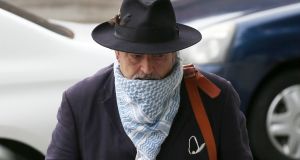 Ian Bailey arrives at the High Court in Dublin for the second day of his latest extradition case. Photograph : Laura Hutton

Lawyers for Ian Bailey have questioned why it took French authorities 22 years to hold a trial for the murder of filmmaker Sophie Toscan du Plantier in the Englishman’s absence.

Earlier, the judge presiding over the extradition hearing Mr Justice Paul Burns expressed his condolences to the family of Ms du Plantier, whose badly beaten body was found outside her holiday home in Schull nearly 24 years ago.

Addressing the court, the judge said that court hearings of any kind are distressing but the “dry nature” of these extradition proceedings should not be taken that anyone has forgotten the tragic nature of Ms du Plantier’s death.

Mr Bailey is wanted in France to face a 25-year prison sentence for the murder of Ms du Plantier and the three-day extradition hearing commenced on Wednesday in the Irish High Court. It is the third time French authorities are seeking Mr Bailey’s surrender in relation to the mother-of-one’s death in Schull in December 1996.

The Englishman (63), with an address at The Prairie, Liscaha, Schull, west Cork, was convicted of the French woman’s murder in his absence in a Paris court in May 2019. The three-judge Cour d’Assises (criminal trial court) in Paris accordingly imposed a 25-year prison sentence on Mr Bailey in his absence. Mr Bailey, who denies any involvement in Ms du Plantier’s death, did not attend the French court and had no legal representation in the proceedings, which he has described as a “farce”.

In a sworn affidavit to the High Court, Mr Bailey said he had nothing to do with the murder of Ms du Plantier. He said that whilst he has not been the subject of criminal court proceedings in Ireland, he has been subject to the criminal process and his standing had suffered greatly in the small rural community where he lives. He tries not to dwell “on being hunted” and writing poetry has had a cathartic effect on him, he said.

At the outset of Thursday’s hearing, Mr Justice Burns inquired if there were any members of Ms du Plantier’s family in court and a legal representative for the family raised her hand. The judge said the nature of extradition law can seem “cold and dry” and observed that court hearings of any kind are distressing. However, the judge said that these extradition proceedings should not be taken that anyone has forgotten the tragic nature of Ms du Plantier’s death.

Mr Justice Burns expressed his condolences to the family of Ms du Plantier but pointed out that the court must deal with the law. Counsel for the State, Ronan Munro SC, said he shared in acknowledging the tragedy that had happened.

Opposing an application for Mr Bailey’s surrender to France for a second day, Mr Munro said it would not have made any difference to his client if the Criminal Law (Extraterritorial Jurisdiction) Act 2019 had applied in the 1990s. The barrister argued that the French authorities lost the entitlement to mount a further attempt to extradite his client in 2017, when the High Court dismissed the second extradition request in respect of Mr Bailey as an “abuse of process”.

Mr Munro said the second extradition attempt by the French authorities was a “deliberate decision” and a “tactical ploy”. “Very little consideration has been given to the prejudicial effect on Mr Bailey which was doomed to fail and it was a direct assault of the decision of the Supreme Court in 2012,” continued Mr Munro, adding that the second request was basically saying that the Irish Supreme Court had got it wrong.

The lawyer said that when “the gamble” was taken to issue a second extradition request against Mr Bailey in 2017, which the French authorities had lost, it “forever closed the door” on future extradition requests being issued against him. “That was the turning point and now they have lost the right,” he added.

Mr Munro said it seemed that the EAWs against his client would never stop. “If Mr Bailey is not treated equally it becomes abusive and that is why we are here to restore equality and eliminate the abuse,” he remarked.

On Thursday afternoon, David Conlan Smyth SC, also for Mr Bailey, invited the court to find that there had been “inordinate, excessive and culpable delay” on the part of the issuing State to put Mr Bailey on trial, which he said remained unexplained. He said the French investigation had commenced in April 1997, when they started looking for information from Ireland. A time must come where the lapse of time is excessive, he pointed out.

Furthermore, the lawyer highlighted that it had been 24 years since the criminal investigation had commenced and seven years since the application was refused by the Supreme Court in 2012 to extradite Mr Bailey, he said. He added that Mr Bailey had been living openly in Ireland during that time and there was no question of him evading justice.

Mr Conlan Smyth also argued that no explanation had been provided by the French authorities as to why it had taken 22 years to hold a trial in his absence in a Paris court.

He said the last EAW was doomed to fail and questioned why the trial in Mr Bailey’s absence was held after the last extradition request in 2017. It was important to note that neither Mr Bailey or his solicitor Frank Buttimer were contacted by any French authorities involved in the Paris trial in May 2019, he said. Mr Buttimer said in his affidavit that he only became aware through media reports in 2019 that French authorities were interested in prosecuting Mr Bailey, said the lawyer.

“At what point does the EAW become so oppressive and burdensome that there is a breach of Article 6 rights. We say that date has long since passed. There is no end to the amount of applications that can be brought,” he argued.

He also said it was of significant concern whether witnesses will travel to France to give evidence at Mr Bailey’s proposed trial in France if he was extradited and asked the court to have regard to that matter when deciding if his surrender should be allowed.

Mr Barron further submitted that the Criminal Law (Extraterritorial Jurisdiction) Act 2019 could be applied to alleged offences committed before 2019. He will continue his legal submissions tomorrow.

French authorities previously sought the surrender of Mr Bailey in 2010 but this application was refused by the Supreme Court in 2012, which held that section 44 of the European Arrest Warrant Act 2003 prohibited surrender because the alleged offence was committed outside French territory and Irish law did not allow prosecution for the same offence when committed outside its territory by a non-Irish citizen. Mr Bailey is a British citizen.

A second French extradition request in respect of Mr Bailey was dismissed as an “abuse of process” by the High Court in July 2017. On that occasion, Mr Justice Tony Hunt held that the “unique features” of the case justified “termination” of the proceedings. He said the Minister was “stopped” or halted from obtaining an order for Mr Bailey’s surrender in light of the Supreme Court’s judgement in 2012 on identical relevant facts.