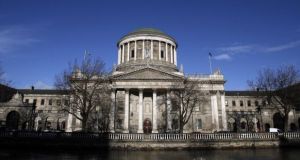 A home-schooled Leaving Cert student is seeking leave to bring a High Court case aimed at requiring the Department of Education to urgently consider his application for calculated grades.

Elijah Burke claims the exclusion of home-schooled students from the calculated grades process breaches his rights under the Constitution and the Education (Welfare) Act 2000, and is arbitrary, unfair, discriminatory and unreasonable.

Unless the court intervenes, he says he cannot progress to third level education for another year.

From Cloonsunna, Castlebar, Co Mayo, the 18-year-old is one of 10 siblings who have all been educated at home by their mother, a registered teacher who has also worked as an examiner for the State Examinations Commission.

It is claimed Mrs Burke had contacted the Minister’s office directly, and the calculated grades executive office, several times seeking to have him considered for a calculated grade and “clarity” for home schooled students but no firm reply had been received. This fails to properly vindicate Elijah’s constitutional right to be educated in the home, to fair procedures and his family life and equality right, it is claimed.

Elijah says he has studied diligently for the Leaving Cert, has followed the Department of Education curriculum and is registered to sit the exam in nine higher level subjects.

He hopes to attend NUI Galway to study Biomedical Science or History with Music. The points for those courses were 533 and 318 respectively in 2019 and he expected to get well above that based on his past performance in mock exams, he said.

He has completed all grades in classical piano, is studying for an associate diploma in piano teaching and has had much success in music competitions, including winning the Royal Irish Academy Composing Competition three times. He and his brother Simeon also won the Mayo Association Dublin debating competition in 2017.

Eight of his siblings have averaged points in the Leaving Cert of 520 and all obtained first class honours degrees in various fields. Two have postgraduate degrees and another is graduating with a PhD this year.

On Monday, Micheál P. O’Higgins SC, with Brendan Hennessy BL, instructed by solicitor Eileen McCabe, for Elijah, told Mr Justice Charles Meenan that papers in the case were provided on Friday to the Minister’s side who had indicated they would not be in a position to deal with it until Wednesday. Noting the urgency, the judge adjourned the matter to then.

Elijah is seeking leave to bring judicial review proceedings against the Minister seeking various orders and declarations, including quashing parts of the calculated grades scheme imposing a “blanket” exclusion on parents acting as tutors for home schooled children.

It is claimed the Minister acted unlawfully in failing to have in place a process for receiving and determining applications for calculated grades for home schooled pupils. An absolute prohibition on all close relatives acting as a tutor for the calculated grades system in the context of home schooled students, is “inherently illogical, unfair, arbitrary, unreasonable, irrational and otherwise than in accordance with law”, it is claimed.

While the calculated grades guidelines preclude accepting estimated grades for home schooled students from a teacher or tutor who is a close relative, that could be resolved by an independent teacher or principal assessing the evidence to determine if calculated grade could be provided, it is argued.

In Elijah’s case, having sat his mock exams at home and with a significant body of course work as part of his Leaving Cert studies, including essays and test papers, he has the same “credible evidence” available to him as any other student in school, it is claimed.

A system has been put in place to provide calculated grades for school-based children of teachers but the Minister had made no effort to put a system in place for students educated at home, it is claimed. The “only possible explanation for this is to avoid administrative inconvenience” but that “cannot trump” Elijah’s constitutional rights.

1 ‘It was pitch black’ - Rescued teenager describes night afloat with her cousin in Galway Bay
2 Aaron Brady, the man who said with pride he was a cop killer
3 A million trees, including 400,000 oaks, to be destroyed this week
4 Inside the O’Brien Fine Foods factory in lockdown Kildare
5 Landlords’ group concerned with manner of Dublin eviction
Real news has value SUBSCRIBE