High Court to rule on case of pregnant woman on Friday 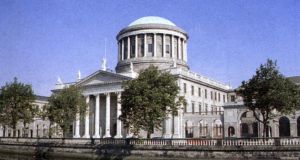 The High Court has begun hearing submissions in the case of a young pregnant woman who has been deemed clinically dead but remains on life support.

A three judge High Court will rule on Friday on whether a young pregnant woman’s life support may be turned off in accordance with her family’s wishes.

The woman was declared brain dead on December 3rd last when she was about 15 weeks pregnant.

Her father earlier said the family was united in wanting her life support turned off and having the woman “put to rest”.

“My daughter is dead, the chances of the foetus surviving are minimal we have been told. I want her to have dignity and be put to rest,” he told a packed High Court today.

The woman has a number of other young children who have been told the nurses “are looking after Mummy until the angels come”, he said.

He had been told at a hospital outside Dublin on November 29th last that his daughter had passed away. This was then confirmed at a Dublin hospital on December 3rd.

When he asked why his daughter was on life support when he had been told she had died, he was told the foetus still had a heartbeat and, under the Constitution, she had to be kept on life support.

The father agreed with Cormac Corrigan SC, representing the interests of the woman, that she was a Roman Catholic and full-time mother who loved her children and had posted a scan of her unborn child on her Facebook page.

Asked if she had ever discussed the possibility of her being in such a situation as she now was, he said “not in a million years”. He did not know what her own view would be as to what should be done in this situation.

The woman’s partner told the court he is the father of the unborn child, and he supported the application to cease the life support. He was also aware that, if the life support continued, there was no medical evidence the unborn would survive.

The woman was Roman Catholic but did not attend church regularly and he could not say what her own view on her current predicament would be. The man said they were both were looking forward to the new baby. They had chosen names for the expected arrival.

Dr Brian Marsh, a specialist in intensive care medicine, said the view of medical science is that the woman is “a corpse” and he was very concerned, should the life support continue, the situation would very quickly become unsustainable.

“I don’t believe this unborn can survive,” he said. He also considered the existing treatment should not be continued.

The woman looks very unlike her normal self, her torso is displaying considerable puffiness and she is receiving the ventilator, hormonal, nutritional and anti-infection supports, he outlined. She has suffered a range of infections to date. It is not possible to maintain long-term somatic support for various reasons, he said.

The woman, aged in her late 20s, is about 18 weeks pregnant and has been deemed clinically dead as a result of a brain trauma. However, arising from the fact of her pregnancy and issues concerning the legal implications of that, she remains on life support in a hospital outside Dublin.

The three-judge court, comprising the President of the High Court, Mr Justice Nicholas Kearns, Ms Justice Marie Baker and Ms Justice Caroline Costello, was convened today to decide whether the law permits the woman’s life support to be turned off.

The woman’s family, in proceedings issued through her father, want the life support turned off. The HSE, the interests of the woman, the unborn and a Dublin hospital where the woman was treated up to December 8th last are also separately represented.

The hearing is being conducted as a plenary action under the inherent jurisdiction of the High Court with the effect all issues may be considered. At the outset of today’s hearing, the judges extended their sympathy to the woman’s family.

John Rogers, SC for the family, said that when the case was initiated last week it was on the basis of the woman having some form of somatic life. That had changed because, on December 3rd, she was declared clinically dead.

Counsel said the woman had headaches and was vomiting and attended at a hospital outside Dublin in late November. On November 27th, she was admitted and on November 29th, she had a fall in a bathroom and returned to her room but appeared not to be well. Later that night, she had a very severe turn, was found to be unresponsive and was later sent for a CT scan.

The results of that scan indicated she had generalised brain oedema, an accumulation of fluids in the cranial cavity and she was transferred to a Dublin hospital, counsel said. There, within a day or so, instructions were given that should she suffer acute cardiac arrest, she should not be resuscitated.

Her family was advised of this and was satisfied that was the correct course, he said. The time of death was recorded at 5.20pm on December 3rd. At that stage, she was still on ventilatory support and somatic material support, which had been ongoing for some days.

Hospital notes recorded that staff were preparing to notify the woman’s family she had passed away.

On December 4th, a meeting was held at the Dublin hospital and it was decided to help achieve delivery of the baby. The family was told that decision was taken “for constitutional reasons”.

Mr Rogers said his side had concluded the eighth amendment to the Constitution, the 1983 anti-abortion amendment, is not applicable to this case and they would make that argument. To that end, they were relying on the R v R Supreme Court ruling in the case concerning embryos. The purpose of the eighth amendment was to protect the unborn from abortion, he said.

His side would be relying on evidence from an obstetrician, Dr Peter Boylan, and from a specialist in intensive care medicine.

His argument would be that, because of the time of the death of the woman, there could not have been any likelihood of viability of the unborn and, in those circumstances, the eighth amendment was not applicable.

His client is in the position, albeit his darling daughter is dead, and her death should be accomplished with the appropriate dignity, that had not happened. “That is why we are here.”

Gerard Durcan SC, for the HSE, said its position on the application is that the medical evidence indicates there is no reasonable prospect that the unborn child will be born alive if the somatic measures are continued. The appropriate order is to declare it is lawful to discontinue the somatic measures.

His position was that it is a matter for the court to consider the prognosis for the unborn in assessing whether it is practicable to vindicate the right to life of the unborn.

In evidence a specialist in intensive care medicine said, in medical terms, the woman is being treated as a corpse. When she died on December 3rd, her foetus was 15 weeks gestation and the current gestational age is about 18 weeks, he said.

He considered the gestational age was the relevant age because that was when the normality of the maternal-foetus relationship in this case was severed as a result of the brain trauma and the subsequent artificial life support.

In response to Mr Dignam, he agreed there is inadequate information about the viability of foetuses in such situations. There was one study of some 30 cases and two of those had survived. If the situation continued as of now, he could give no comfort that this would be a healthy child, he said.

He told Mr Corrigan the woman was not taken off the ventilator for the purpose of establishing brain death which is one of the clinical tests done to establish this. It was not done in this case because of the pregnancy. In reply to other questions, he said he was not aware of any patient ever recovering from this situation. “This patient has a dead brain,” he said.

Dr Boylan told Mr Rogers he had viewed the medical notes on the woman. They noted she was “incoherent with pain” when reviewed at a hospital outside Dublin on November 29th after falling in the hospital bathroom due to losing her balance.

Dr Boylan said the notes indicated the medical team was concerned about the legal implications, in light of the woman’s pregnancy, of acceding to the woman’s family’s wish to turn off her life support. The family were also spoken to at length about the implications of Irish constitutional law on December 4th last, he said.

The woman’s body was transferred back to her hospital where she was initially treated on December 8th, he also outlined.

He said doctors were correct to seek legal advice on this situation. Doctors are unclear what to do as a consequence of the eighth amendment and are guided by the court in that regard, he said.

Asked by Mr Justice Kearns whether medical guidelines would be helpful, he said they were. “Repeal of the eighth amendment would be even more helpful,” he said.

He said there was a distinction between abortion and what was proposed here, the removal of support for the mother.

He was only able to find three cases where somatic support began before 18 weeks with a successful outcome. This was “uncharted territory” and continuing somatic support in this case could therefore be, in his view, regarded as “experimental”. He also considered there was a risk of infection to the unborn.

The viability of a foetus is generally regarded as 24 weeks, he said. However, only 25 per cent of babies born then survive and,of those, only 15 per cent are not disabled. The likelihood of a successful outcome in this particular case is “very low”, he said. Just because something can be done in medicine, does not mean it should be.

While one study of nine cases where somatic support was provided showed three babies had survived, there was no report of a case where a baby with a gestational age of 15 weeks survived on the basis of somatic support, he told Mr Dignam.

He was aware of another medical report which indicated this unborn appeared to be doing well and there were no indications as of now that its wellbeing was compromised. He did not consider it could be concluded from that report there might be a successful outcome.