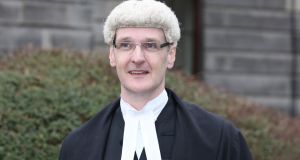 Mr Justice Max Barrett said he had considerable sympathy for the women and in the “unenviable position” they found themselves. Photograph: Collins

Two assistant censors at the Irish Film Censor’s office have failed to get injunctions preventing the Minister for Justice dismissing them before their High Court challenges over those dismissals have been determined.

They claim the Minister’s decision to terminate their office is unlawful and was orchestrated in a deliberate and cynical manner to avoid being exposed to any claims.

In their judicial review proceedings, they want the court to quash the Minister’s decision to terminate their office as assistant censors and to declare they hold those positions.

They claim the reason for their termination must be communicated to them and the process used by the Minister was unlawful in the absence of a rational reason.

They also sought injunctions, to apply pending the full hearing of their case, preventing the Minister removing them.

The Minister denies their claims and also opposed their injunction applications.

In his judgment on Friday refusing the injunctions, Mr Justice Max Barrett said he had considerable sympathy for the women and in the “unenviable position” they found themselves.

However, he must “respectfully decline” their application for interlocutory injunctions on grounds including, having regard to the matters before the court, he did not consider they had demonstrated a strong case in which they are likely to succeed.

While they had demonstrated an arguable case, it seemed the greater risk of injustice lay in granting injunctions which would require the Minister to undo what she has done, he said.

The court’s discretion ought to be properly exercised by refusing to grant the injunctions, he said.