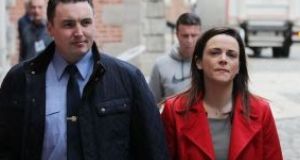 Garda Keith Harrison and his partner Marisa Simms arrive for a hearing of the Disclosures Tribunal in Dublin Castle in 2017. File Photograph: Stephen Collins/Collins Photo

Garda Keith Harrison has lost his High Court challenge over being refused most of his costs of appearing before the Disclosures Tribunal investigating claims by Garda whistleblowers.

Donegal-based Garda Harrison previously lost separate proceedings aimed at quashing the tribunal’s criticisms of him in its second and third interim reports, published in 2017 and 2018 respectively.

The tribunal rejected allegations by Garda Harrison and his partner Marissa Simms, including that Ms Simms was compelled by gardaí­ to make a statement against Garda Harrison which led to a Tusla referral.

Garda Harrison also alleged he was the victim of a five-year intimidation campaign after arresting a fellow officer for drink-driving in 2009.

Mr Justice Charleton said the allegations by Garda Harrison and Ms Simms with which the tribunal’s terms of reference were substantially concerned were unfounded.

Garda Harrison challenged the tribunal’s subsequent December 2019 ruling he was entitled to costs of his legal representation up to and including the opening day of hearings, but no further costs beyond that point.

Garda Harrison, who attended the tribunal over 19 days and gave evidence over three, argued he was entitled to all his costs for reasons including he assisted the tribunal in every way, made allegations he believed to be true and had never changed his belief.

The tribunal argued the costs decision was consistent with its powers and based on a basic absence of cooperation by Garda Harrison before it, having regard to its findings.

In a judgment published on Monday, Mr Justice Mark Heslin stressed this challenge concerned the lawfulness of the costs decision only and was not an attempt to disturb the tribunal’s findings.

He said the costs decision was “clear, rational and based on stated reasons” and makes clear it is to be read in conjunction with, inter alia, the tribunal’s second interim report, which concluded the allegations made by Garda Harrison and Ms Simms which were examined by the tribunal were “entirely without any validity”.

The tribunal’s findings concerning Garda Harrison, including of “deceit, evasion, a tailoring of evidence and a shifting of position to suit his purposes” were findings relating to active, conscious and knowing “conduct” on Garda Harrison’s part, insofar as his engagement with the tribunal was concerned.

The conduct findings, especially in the second interim report, were to the effect Garda Harrison knew he was giving false or misleading information to the tribunal, the judge said.

The tribunal was entitled to regard Garda Harrison as having failed to co-operate with it and to having knowingly given false or misleading information to it, having regard to findings by the tribunal as to his conduct insofar as information, answers and evidence provided by him to it were concerned.

The tribunal had considered arguments by Garda Harrison for his entire costs and could not find any basis for an award of costs cased on co-operation, he said.

It might be said it was open to the tribunal to award no costs to Garda Harrison but it had not done so, he added. The tribunal had considered it might be argued Garda Harrison was entitled to instruct solicitors who would instruct counsel and very extensive disclosure by the tribunal would have to be analysed and, on that basis, awarded costs up to the opening day of the substantive hearings but not afterwards.

The costs decision was made in accordance with the powers conferred on the tribunal and with fair procedures and there was nothing impermissible about it, even if its consequence meant Garda Harrison faces a financial burden, he said.

There was no evidence Garda Harrison got inequitable treatment compared with other witnesses before the tribunal, he added.