Garda awarded €250,000 after gun incident left him with PTSD 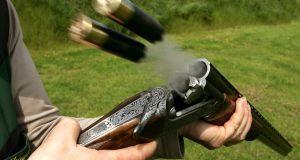 A former garda who suffered post traumatic stress disorder after a shotgun that was pointed at him failed to discharge, has been awarded €250,000 compensation in the High Court.

A former garda who suffered post traumatic stress disorder after a shotgun that was pointed at him failed to discharge, has been awarded €250,000 compensation in the High Court.

Mr Justice Michael Twomey, who deals with garda compensation cases, was told that Patrick Kavanagh, of Sion Hill, Blackrock, Co Dublin, was awarded the Scott Medal for bravery arising out of the incident. He has since retired.

Michael O’Sullivan, counsel for the Minister for Public Expenditure, told Judge Twomey that Mr Kavanagh’s claim had been settled and was before the court to be ruled on.

Mr Gavigan told the court that a Store Street colleague, Garda Stephen Foley, was with Mr Kavanagh on April 21st, 2002 when they faced down the raiders after being called to an armed robbery in progress at The Strand House pub on Dublin’s North Strand.

A masked man carrying a shotgun and another man armed with a knife jumped into a Honda getaway car and sped off with the two gardaí giving chase. The raiders abandoned their car and as the gardaí­ gave chase the gunman pointed a shotgun at them and pulled the trigger, but it misfired.

Mr Gavigan said Mr Kavanagh suffered significant post traumatic stress disorder and the State had fairly met the case at an early stage and settled his claim which included a large sum for special damages. Judge Twomey approved the award.

After the gun failed to discharge, the two raiders abandoned the car near Spencer Dock and fled on foot in different directions. After identifying the driver of the car, Mr Kavanagh returned to the vehicle and recovered the shotgun.

His colleague chased one of the raiders through the back gardens of houses at Spencer Dock. The raider eventually ran into one of the properties where he hid in an upstairs bedroom. When back-up arrived, the two raiders were arrested.