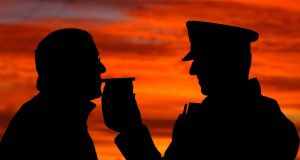 A High Court judge has rejected claims by a man convicted of drink driving that, before breathalysing him, a Garda should have given him the option of having the printed breath specimen result in Irish or English. File photograph: John Giles/PA Wire.

A High Court judge has rejected claims by a man convicted of drink driving that, before breathalysing him, a Garda should have given him the option of having the printed breath specimen result in Irish or English.

The availability of printed breathalsyer statements in Irish and English is clearly there for the benefit of the person providing breath specimens and not the Garda, Mr Justice Donald Binchy said.

If a person expressed a choice of language, the Garda was obliged to provide the statements in whatever language was specified but the relevant 2015 Regulations applying to breathalyser statements do not oblige the Garda to provide that choice to the person providing the specimens, he ruled.

There was no obligation on the garda to ask Gerard Maher which language he required the breath specimen statement to be produced in, he said.

Even if he was wrong in that finding, it was clear the failure to provide that choice did not result in any unfairness, prejudice or detriment to Mr Maher “who is clearly an English speaker”, he held. The breath specimen statements were admissible as evidence in Mr Maher’s prosecution, he ruled.

Mr Maher’s lawyers, the judge noted, had emphasised that his case was based on statutory interpretation of the relevant legal provisions and not any claim with regard to language rights and was “not an Irish language case”.

The case arose from the prosecution and conviction of Mr Maher, of Ballysallagh, Ballynacargy, Co Westmeath, under the Road Traffic Act 2010 for driving with excess alcohol.

Mr Maher was arrested by Garda Marius Stones at 1.10am on October 25th 2015 after being observed driving “erratically”. Mr Maher was taken to Mullingar Garda station where he was required to provide two breath specimens by blowing into a brethalyser apparatus.

Garda Stones had told the District Court that he explained in ordinary language the penalties for failing or refusing to provide breath specimens and Mr Maher confirmed he understood this. Garda Stones also gave evidence all of the conversation took place through English, the judge said.

Mr Maher provided the specimens and the breathalyser apparatus printed two statements as required by the relevant provisions of the 2010 Act. Those statements were signed by Mr Maher.

In cross-examination, Garda Stones said he had not given Mr Maher the option whether the statements were to be produced in English or Irish. District Judge Seamus Hughes later refused to dismiss the prosecution after rejecting claims the failure to give Mr Maher that option breached the 2015 regulations.

On foot of the statements, which showed the concentration of alcohol in the breath was 77mg of alcohol per 100ml of breath, Judge Hughes convicted Mr Maher.

Judge Hughes later granted an application by Mr Maher’s lawyers to refer legal issues to the High Court for decision.