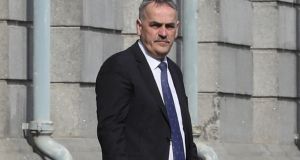 Patrick Fedigan (51) brought proceedings over the alleged effects of taking Lariam while he served with the Defence Forces during UN peacekeeping deployments to Africa. Photograph: Collins Courts.

A former soldier has settled his damages action against the State over health problems allegedly suffered as a result of being prescribed the anti-malaria drug Lariam.

Patrick Fedigan (51) brought proceedings over the alleged effects of taking the drug while he served with the Defence Forces during UN peacekeeping deployments to Africa between 2001 and 2009. The claims were denied.

John Gordon SC, with Bruce Antoniotti SC and John Nolan BL, instructed by Kent Carty Solicitors, for Mr Fedigan told Mr Justice Bernard Barton on Tuesday that following out of court talks between the parties, the action had been resolved.

Counsel said the case could be struck out. No further details of the settlement, understood to be confidential, were given.

The State, represented by Eoin McCullough SC, Declan Buckley SC, Garrett Cooney BL and Joe Jeffers BL, had denied negligence or liability for any injuries suffered by the plaintiff.

The defendants had also argued Mr Fedigan was out of time to bring his case.

The action is one of several similar cases brought against the State by members of the Defence Forces who claim they suffered various illnesses as a result of being prescribed Lariam.

In his action, Mr Fedigan from Lobinstown, Navan, Co Meath claimed he was prescribed Mefloquine Hydrochloride (Lariam) when he served in Eritrea in 2001, Liberia in 2002 and Chad in 2009.

He claimed that as a result of his exposure to Lariam , he has suffered from conditions including loss of balance, anxiety, panic, insomnia, vertigo, and memory problems.

He claimed the Minister for Defence, Ireland and the Attorney General were negligent and in breach of their duty towards him on grounds including he was not a suitable person to be prescribed Lariam.

The ex-soldier claimed his prior medical history had not been ascertained before he was prescribed Lariam and the defendants did not provide him with adequate support, treatment or management when he made complaints of symptoms after being prescribed it.

Mr Fedigan further claimed the defendants failed to provide him with a safe system of work, and exposed him to risk of injury which they out to have known. He retired from the Defence Forces in 2013.

The case, had it proceeded, was expected to last up to 10 weeks.